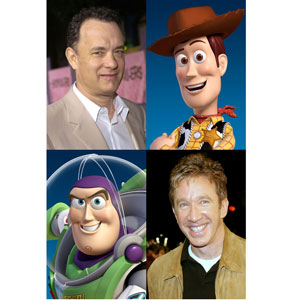 Disney/Pixar's Toy Story 3 reunites one of the most engaging and entertaining vocal ensembles in movie history, with Tom Hanks back in the saddle providing the voice of the popular pull-string cowboy sheriff Woody, and Tim Allen signing on for his third mission as the heroic, intrepid and occasionally deluded space ranger Buzz Lightyear.

For Tom Hanks, slipping back into the role of Woody after a long absence was an easy assignment. "Woody is a passionate guy who throws himself into every action," says Hanks. "As soon as he has an instinctive thought, like 'I have to help them' or 'I have to run away,' he does it with 100-percent commitment. You gotta love that about anybody. I also love the way the relationship between Woody and Buzz has grown. They started off as pure adversaries and learned how to accept each other's strengths, forgive each other's failures, and respect each other as individuals. Opposites definitely attract in this case.

"The fact that Pixar can come up with a third 'Toy Story' movie and have it be completely fresh and real and unique shows just how brilliant they are," continues Hanks. "There's this great logic that John Lasseter and Lee [Unkrich] and Darla [K. Anderson] and all the writers adhere to that makes moviegoers just kind of relax and let themselves be transported to this magical place and time. When you can do that with a movie, it's amazing. With 'Toy Story 3,' you come back to a lovely, familiar and happy place. What's great is that I get credit for the way the character and the humor come off. I have kids that are now in college come up to me and say, 'When you told that neighbor kid to play nice, that really meant a lot to me.'"

Hanks says that the franchise's third installment is not light on emotion. "'Toy Story 3' is a big, massive adventure that has you constantly on the edge of your seat," he says. "It's part 'Great Escape,' with the same kind of excitement as Dorothy escaping from the Wicked Witch of the West. And yet they take those elements and turn them into something that is very emotional. We're talking about toy dinosaurs and Mr. Potato Head, and yet you feel for them and don't want them to get recycled or stuck with the bratty kids. You want them to be together and played with at the end of the movie. You're worried for their essence. The filmmakers at Pixar always manage to get you right in the heart. The story is as simple as growing up and having a guy go off to college, but it is so profoundly emotional that you can't help but have tears in your eyes."

Tim Allen also recognizes the magic in the new film. "'Toy Story 3' is a remarkable achievement with a story that is so good they could have marketed the storyboard version," says Allen. "Even though I knew the story and had read the ending, it grabbed me in the best possible way; I know audiences are going to have the same reaction. There are great action sequences, but the beauty of the movie is the evolution of the subtleties in the shot selection and how it is directed. Pixar just keeps getting better and better. This is a very simple story about friendships and staying together. I love that the ending is really a new beginning. You realize that one door shuts and another one opens. It's very, very emotional.

"The great thing for me about working on the 'Toy Story' films is the great friendships I've made with all the people at Pixar and with Tom Hanks," adds Allen. "Tom and I really like working together and being around each other. I totally respect his talent and I think he feels the same about me."

Allen was a fan of Buzz's storyline. "In this third film, Buzz gets to expand his role," says the actor. "When he accidentally gets reset, he speaks perfect Spanish. He's a conquistador and a bull fighter. It's pretty hysterical. I really do like being Buzz. He's a character I developed with John Lasseter and he's a lot of fun to play."