Five finalists selected for the 2007 Cinema One Originals filmfest 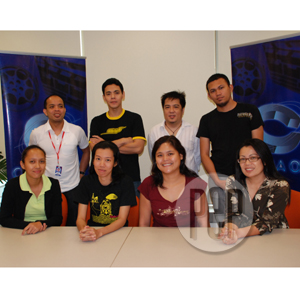 (From left, standing) Cinema One Originals project head Ronald Arguelles joins the directors of the chosen films, namely: Rico Ilarde of Altar, Pablo Biglang-awa of Maling Akala, and Adolfo Alix Jr. of Tambolista. They are joined by (from left, seated) Jiji Borlasa for Confessional, Mammu Chua of Altar, Krisma Maclang for Sa Ikawalo, and Veronica Velasco of &

After months of deliberation and a worldwide search for inspiring stories about the Global Pinoy, ABS-CBN's movie feature channel has finally chosen five finalists for the third annual Cinema One Originals Digital Film Festival. Last year's batch had seven entries , all of which were given a production grant of PhP700,000.

When Cinema One announced the opening for submissions for the much-awaited digital film fest with the theme: "Ang Kuwento ng Pinoy sa Buong Mundo," Filipinos here and abroad did not hesitate to participate. From around 130 entries, the selection was cut down to 22 semi-finalists who went through several screenings and presentations, until the five promising finalists were selected.

Viewers can look forward to an exciting lineup for this year's indie festival. Cinema One offers a variety of genres and an impressive set of filmmakers. The five finalists are:

Giving a different take on Philippine horror and the supernatural is Rico Maria Ilarde's Altar, a terrifying movie about a retired boxer working as a carpenter in a haunted and cursed mansion. Ilarde also helmed the films Shake Rattle and Roll 2K5, Babaeng Putik, Dugo ng Birhen, and Sa Ilalim ng Cogon.

The collaborative effort of commercial director and cinematographer Ruel Antipuestoand musical composer Jerrold Tarog, Confessionalis also one of the finalists in this much awaited movie festival. It is a dark comedy about a small-time filmmaker who is about to witness a life-changing confession from a retired politician.

Inang Yaya co-directors Veronica Velasco and Pablo Biglang-awa come up with another beautiful story for their entry in this year's Cinema One film fest. Maling Akala is a romantic comedy with a twist of drama coming from the lead character's pressing homosexual issues.

Fajardo makes a comeback from last year's competition. His entry Raket ni Nanay was also included in Cinemanila's Digital Lokal for that year. His new entry, Sa Ikawalo, tells the heart-wrenching story of longing and obesity: an OFW rarely seeing his daughter, and the child battling with anorexia and obesity.

Finally, fresh from his victory for the film Donsol, writer and director Adolfo Alix Jr.gives us Tambolista, a raw drama about poverty, guilt and redemption.


The Third Annual Cinema One Originals Digital Movie Festival and Awards Night are set to run in September 2007.