Director Mac Alejandre talks about his latest movie In Your Eyes 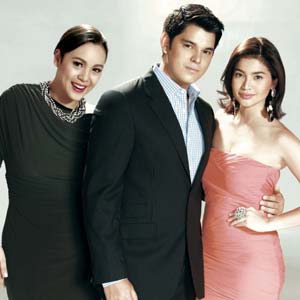 (From left) Claudine Barretto, Richard Gutierrez, and Anne Curtis figure in a dramatic love triangle in their latest film In Your Eyes, which opens today.

In Your Eyes is director Mac Alejandre's fifth movie for GMA Films. Co-produced by Viva Films, it tells the story of two sisters who are caught in an unexpected love triangle with one man.

Three actors are given top billing in the film, which opens today, August 18. Claudine Barretto plays Ciara, a physical therapist who made great sacrifices for her sister Julia, played by Anne Curtis. Richard Gutierrez plays Storm, a freelance photographer who comes between the two sisters.

Director Alejandre said they encountered no problem in making the movie. The script they used, for instance, did not undergo any major revision.

"In fairness to all my actors and to the management teams of all my actors, pag-present sa kanila ng script, after the first meeting regarding the script, yun na yung sinunod naman from the start. Walang input, walang nag-suggest, walang nakialam. Kung ano yung script na ginamit namin on the first day of shooting, yun ang nanatili hanggang sa last day of shoot," he told the press yesterday, August 17, at the movie's press conference at Annabel's restaurant in Quezon City.

He added that they could have explored several alternate endings but he was happy they stuck to what was in the script.

"Totoong maraming endings. Maraming possible endings. Ang isang possible ending ay ang napanood ninyo [during the August 15 premiere of the film in SM Megamall]... Hindi ibig sabihin na it is the best ending, hindi ibig sabihin na that is a bad ending. Any ending can be correct or right based on what is relatable to the audience... We felt that that was a more commercially-viable ending. We felt that it gave more credence to the start of the film," Alejandre explained.

According to scripwriter Keiko Aquino, the story was taken from real life.

"Ang istorya na 'to is a found story," she said. "True story siya, pero I had to tweak it na gawing magkapatid. Totoong nangyari itong couple that went to America, TNT, kinailangan ng babae na mag-asawa ng American citizen, tapos nagka-inlaban, kailangang maghiwalay. Umalis yung lalake sa bahay, and he died alone in his apartment. True story ito so I had to tweak it. Matagal na 'tong inaawitan even in the other station. Ayaw ibigay siyempre ng babae, so I had to tweak it."

ON ACTING. When asked to describe the acting skills of his actors in the movie, Director Alejandre said he witnessed their performances improve by "leaps and bounds."

Director Alejandre said both Claudine and Anne were great actresses.

In conclusion, he said, "Lahat sila nag-dedicate ng panahon, ng talino, at bago pa magsimula ang pelikula, nangako na sila sa sarili nila that they would do good. And that's what they did."