Andi Eigenmann rises to the challenge of portraying dual characters 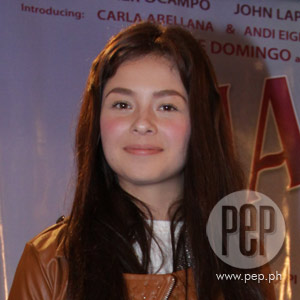 Andi Eigenmann made a splash with her first lead role on television via ABS-CBN's primetime show Agua Bendita. The daughter of veteran actress Jaclyn Jose plays a character imbued with healing powers and has an unusual appearance. This fantaserye is expected to end this September.

For her first acting stint on the big screen, Andi is again tapped to portray twins with different personalities. In Mamarazzi, she will play Peachy and Strawberry, the two daughters of Violy Langit (Eugene Domingo). AJ Perez is cast as Dingdong, the only son of Violy who has a rebellious streak. Directed by Joel Lamangan, this comedy film is scheduled to open in cinemas nationwide on August 25.

During the August 13 press conference of Mamarazzi held at the Imperial Suites in Quezon City, Andi pointed out the differences of her two characters.

She described Peachy as an extrovert and an over-achiever, and Strawberry, an introvert whose only desire is to please her mom. In the movie, Peachy has a boyfriend, who will be portrayed by Carl Guevarra.

She also put a lot of effort in differentiating them through their physical appearance and mannerisms.

Although she admits that she had fun portraying dual characters, she points out that it is a time-consuming process since she needs to act again and again for the different camera angles.

PROUD TO BE AN EIGENMANN. Because she is part of the Eigenmann clan, with family members who are already established in the entertainment industry, Andi admits that she felt pressured especially when she was just starting out in showbiz.

Are her parents, Jaclyn Jose and Mark Gil, expecting Andi to be just as great in the field of acting?

"At first when I was starting, yeah, I felt the pressure because I didn't know yet how fans would see me... if they would like me or kung papatok talaga ako sa mga tao. Napressure talaga ako kasi marami akong kapamilya na sobrang successful na sa industry, veteran actress talaga lahat so na-pressure ako," admits the 19-year-old actress.

However, she pointed out that they put much importance to their individuality. "Sobra yung individualism sa amin, sobrang nirerespect na parang whoever I am, yun ang dapat. Hindi dahil Tita ko si Tita Cherie [Gil], I have to be like her or act like her. I'm also an individual.

"Being an Eigenmann is a perk because we are all artists. So, I also want people to know me as someone who is also very passionate about her work, just like my Kuya [Sid Lucero], who is my idol."

She stresses: "Outside showbiz, we are just ordinary people."

BITTEN BY THE ACTING BUG. Even though most of her family members and relatives work as actors, Andi confessed that she didn't think she would become an actress herself one day.

"I didn't want to be in show business before. Ayaw ko talaga," Andi recalled.

Why was she hesitant to enter showbiz?

"Well, the reason why dati ayaw ko po mag-artista was because it was very close to me already that I didn't bother discovering what it would give me. Pero ever since, I've always been interested in the field, in films and in the arts. Alam ko basically what my kuya and my mom have been doing for the industry. Pero ako ayaw ko, kasi parang gusto ko behind [the scenes]. Siguro maging writer, gusto ko i-try maging filmmaker. Gusto ko mag-create kasi, e."

"When I experienced acting as a hobby. I tried to do it. It considered it only as a hobby kasi I was only in high school in 2007 for Prinsesa ng Banyera. Dun po yung first ko na try na umarte and I fell in love with it. Then I realized maybe it is really in the blood.

"Prinsesa ng Banyera helped me discover what my real passion is," she said with pride.

Andi finished high school in Miriam College before she accepted the lead role in Agua Bendita. Mamarazzi is her first movie with Regal Films after signing a three-picture contract with the film outfit of Mother Lily Monteverde.

With reports from Nica Tomines