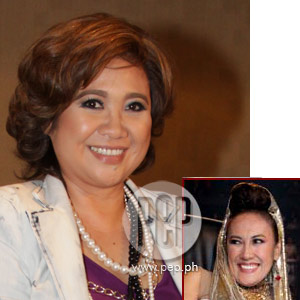 "I always have respect for Ai-Ai because she is our queen. When it comes to comedy, nauna siya sa ating lahat. Sa pelikula niya, dun ako unang nakita. I supported her and in real life, we support each other," says Eugene Domingo (main photo) about her supposed rivalry with Ai-Ai delas Alas (inset). Mamarazzi, the family comedy film from Regal Films, will open in cinemas this Wednesday, August 25.

For the 50th anniversary of Regal Films, Eugene Domingo will be portraying a mother of triplets in the comedy film Mamarazzi. Because of this kind of plot, some people are comparing Mamarazzi with the Ai-Ai delas Alas-starrer Ang Tanging Ina.

"May respeto ako sa posisyon ni Ms. Ai Ai de las Alas because she is the Comedy Queen. She's always ahead of me.

Although they are both family comedies, Uge says that there are big differences between the two films.

Mamarazzi is directed by Joel Lamangan for the 50th anniversary of Regal Films while the Ang Tanging Ina series is megged by Wenn Deramas for Star Cinema.

What is Uge's reaction to fans and critics who pit her against the Comedy Queen Ai-Ai?

Aside from being pitted against Ai-Ai, Uge is also being compared to TV host-comedienne Pokwang. For her part, Uge says that she has nothing against the host of Pilipinas, Win na Win. Uge even stated, "I am looking forward to a movie with Ai-Ai and Pokwang—the three of us. Di ba masaya yun? Nakasama ko na si Pokwang sa pelikula. Sa tingin ko, dapat si Pokwang i-launch na."

In Mamarazzi, Andi Eigenmann portrays the two daughters of Eugene named Peachy and Strawberry. The comedienne says that she can relate to Andi's situation since she herself portrayed dual roles in her launching film Kimmy Dora: Kambal sa Kiyeme.

SYNOPSIS. Everybody knows about the paparazzi—people who stalk celebrities, following their every move. But have you ever heard of a "mamarazzi"?

Mamarazzi is the story of a mother who constantly pries into the lives of her three children, often resulting in riotous and hilarious situations.

Fifteen years ago, Violy Langit (Eugene Domingo), an owner of a small funeral parlor, learns that she is suffering from a medical condition that requires her to undergo a hysterectomy. All her life, she's wanted to have children, and she realizes that she has to do it before the procedure. But Violy has no man in her life—no husband, no boyfriend, no suitors. She seeks the help of her gay best friend, Mandy (John Lapus). Out of pity and love for Violy, Mandy offers his boyfriend, Carlo (Diether Ocampo) to serve as a sperm donor.

With Mandy's blessing, Violy and Carlo share a night filled with romance, passion, and mystery—for after that night, Carlo disappears completely from the lives of Violy and Mandy.

But Violy gets her wish. She is blessed with a set of triplets—two girls, Peachy and Strawberry (Andi Eigenmann in a dual role), and one boy, Dingdong (A.J. Perez)—which she raises as a single mother.

As the children gets older, Violy, with all her might, does all ways and means to have happy kids even to the extent of helping her son get the girl that he wants: Mimi (Carla Abellana). Her being an extremely controlling and overly nosy mother makes the kids wonder about their mom's intentions. Little do her children know that all she's doing is just to make her family happy. Adding to the children's frustration, is getting their mom to reveal to them her secret: the real identity of their father.

As tensions run high and emotions soar, their story explodes in a flurry of shocking, funny, and quirky revelations that would forever change everyone's lives.