George Clooney is The Americanassassin 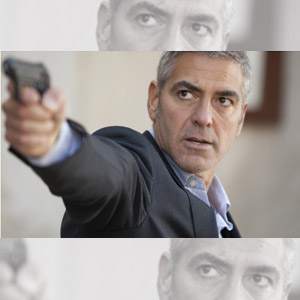 Academy Award-winner George Clooney plays Jack, a weapons maker for professional assassins and a killer himself, who suddenly becomes the target, in Focus Features' new thriller The American .

Academy Award-winner George Clooney plays Jack, a weapons maker for professional assassins and a killer himself, who suddenly becomes the target, in Focus Features' new thriller The American.

In many ways, the character fits Clooney: smart, handsome, worldly. But the character is hardly the man, who in addition to being voted "sexiest man alive," is a writer, director, producer and humanitarian.

Indeed, as The American director Anton Corbijn says, Clooney is able to weave all of these identities together: "He's a director's favorite in terms of understanding what a director needs from an actor. He's directed three films and so he knows that it's very important to have an actor who's on set. So George is never in the trailers. He's on set and ready."

"Jack is a character George hasn't played before; it's always interesting when an actor finds something new," continues Corbijn. "He's so good with dialogue, and in this movie he is playing a man of few words who is always on the lookout and constantly in a state of tension."

Producer Grant Heslov adds, "Jack is someone who is only now finding moments of beauty in his life. Even if he now makes the right choices, does fate have a different idea for him? George brings this stillness to the role of Jack, who spends a lot of time in silence. That's a challenge for an actor, to keep the inner life going on-screen."

"This role reminds me of George's Oscar-nominated work in Michael Clayton, in that he can convey so much through his eyes alone," offers producer Jill Green. "Audiences instinctively place their trust in George, which is important to our establishing the character of Jack."

However, producer Anne Wingate says, "It's a much darker role for George, yet he embodies the character so well. We were all rather ecstatic to get him to play the part."

Of his leading man, Corbijn states, "He is a serious actor yet keeps everyone entertained on set, so cast and crew enjoy his company, and he takes pleasure in the work. He's so good at keeping everyone motivated. George also knows how to deal with the attention he gets in public with charm and grace, which was invaluable."