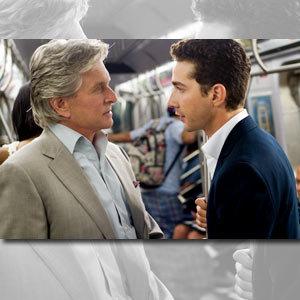 Michael Douglas is back in his Oscar®-winning role as Gordon Gekko whose iconic "Greed is good" mantra and daring corporate raids made him a rock star of financial titans. No longer the king of Wall Street, Gekko emerges from Federal prison after serving eight years. While away, his wife has divorced him, his son has died, and his one remaining family member, his daughter Winnie (Carey Mulligan), won't speak to him.

Resolute to win back the love of his daughter and determined to reestablish his position as Wall Street's most powerful broker--Gekko joins forces with Jake Moore (Shia LaBeouf) who is engaged to Winnie. Jake personifies the brilliant technologically savvy individuals who by 2008 were making millions before they turned thirty. Gekko uses Jake to gain access to Winnie--and Jake seeks Gekko's advice in gaining the upper hand over Bretton James, a ruthless investment banker whom Jake holds responsible for his mentor and firm's destruction.

Gekko's imprisonment taught him many lessons, says Douglas. "He's had a lot of time to think. He can see much more clearly. He's bearish on what's been transpiring in the world of finance. Gekko is able to look at the problems objectively and he can see how screwed we are."

When Gekko is released from prison, he is determined to reestablish his position as a Wall Street's most powerful broker. But he's looking for more than re-accumulating vast sums of money; "Gekko wants to be acknowledged," Douglas explains. "It's one of the reasons he's written a book."

"The (first) film's popularity grew over the years," adds director Oliver Stone, who was initially surprised by the way audiences embraced Gekko. "I made 'Wall Street' as a morality tale, and I think it was misunderstood by many. It's still amazing the number of people who came up to me over the years and said, 'I took on a career on Wall Street because of your movie.' Many of them are now in their 30s, 40s and were doing quite well on the Street--as honest traders, I should add."

"By 2008, no more Gordon Gekkos were possible," he continues. "That character, was now gone, replaced by institutions that had once formerly been regulated. In the past, a bank was a bank, and an insurance company was an insurance company. In 2008, that all changed. The firewalls between these functions were destroyed by the deregulation of the 1980s and 90s. The crash happened in 2008 and that made it suddenly very interesting, because you saw all the flaws in the system," explains Stone. "Wall Street: Money Never Sleeps" is really a reckoning with what happened."

Wall Street 2: Money Never Sleeps will open September 29 in theaters from 20th Century Fox to be distributed by Warner Bros.