Dramatic moments of Sa 'Yo Lamang get warm reception from moviegoers 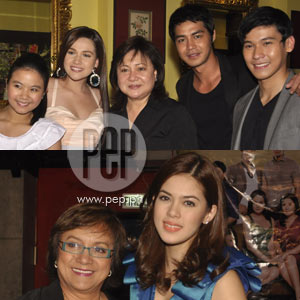 Sa 'Yo Lamang, a family-oriented film directed by Ms. Laurice Guillen and written by Ricky Lee, opened in cinemas starting this Wednesday, September 1. Last night, August 31, the cast members and crew of the movie were able to watch the movie with their family and friends as well as their fans at SM Megamall Cinema 10.

Cast members who were present that night were Shaina Magdayao, who was escorted by co-star Enchong Dee on the red carpet; Bea Alonzo and Lorna Toletino, Zanjoe Marudo, Lauren Young, Miles Ocampo and Igi Boy Flores. Coco Martin was unable to attend that day because he had to attend to an urgent family matter. Ms. Lorna was accompanied by her two sons Ralph and Renz while Ms. Laurice's daughters, Ina and Ana Feleo, made it a point to grace the event as well.

As part of Star Cinema's 17th anniversary offering, this movie focuses on a family torn apart by circumstances and personal dilemma. This is similar to another ensemble film directed by Ms. Laurice titled Tanging Yaman. Produced by Star Cinema in 2000, the movie revolves around a matriarch (portrayed by Gloria Romero) who struggled to keep her family intact despite the controversies surrounding them. The film starred Hilda Koronel, Edu Manzano, Dina Bonnevie and Laurice's husband, Johnny Delgado.

Sa 'Yo Lamang begins with a house blessing wherein Dianne (Bea) and Amanda (Lorna) are shown to assume the role as heads of the family. In the midst of their celebration, Mr. Alvero (Christopher de Leon) re-enters their home after 10 years of being separated from his family. Amanda and Coby (Coco) eagerly accept him while Dianne shows her anger at him for abandoning them in the past. The two young children, James (Enchong) and Lisa (Miles) have mixed emotions about the return of their absentee father.

The cast members expressed their happiness and gratitude for the warm reception given by audiences to the movie. They were even more excited about the movie when they learned that it was graded A by the Cinema Evaluation Board.