PEP REVIEW: Sa 'Yo Lamang will not disappoint viewers looking for inspiration 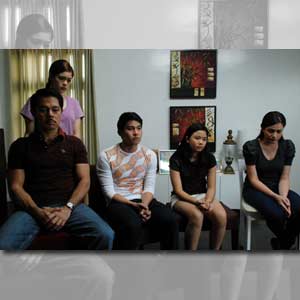 If you're asked what Star Cinema's latest film Sa 'Yo Lamang is all about, you just have to mention Tanging Yaman and you will be understood completely.

Tanging Yaman was released ten years ago and it has remained in our consciousness ever since. Receiving both commercial and critical success, it can be considered as a pioneer of the religious family-ensemble drama genre. This 2010, the director behind this landmark film, Laurice Guillen, returns with Sa 'Yo Lamang.


Undeniably, the two films have a lot of similarities such as its central theme of faith as well as the famous and memorable fade to white effect. Dominic Ochoa and Shaina Magdayao are the only stars who are included again in Direk Laurice's ensemble film.

When assessing Sa 'Yo Lamang, it is inevitable that comparisons will be made with its predecessor. Unlike Tanging Yaman that features three families, Sa 'Yo Lamang zeroes in on one family, but one that's plagued with differences and problems just the same.


The film begins with the return of the estranged father Franco (Christopher de Leon) who after a very long time decided to show up, of all occasions, at the housewarming of the family he left behind. The mother Amanda (Lorna Tolentino) is willing to take him back but eldest daughter Dianne (Bea Alonzo) seethes at the thought of forgiving her father, and worse, living in the house she practically built. At first, it was not clear why Dianne became this angry (to the point of telling the ultimate Filipino cussword to her father's face) but as the story goes on, we discover how Dianne worked almost all her life, sacrificing everything for the sake of her mother and siblings.

It's not the same for all the kids, however. Coby (Coco Martin), and to some extent James (Enchong Dee) and Lisa (Miles Ocampo), lobby for their father to be given another chance. In the end, Dianne agrees to this arrangement and from there starts the uneasiness and the tension within the household. He discovers what has become of his family, especially Dianne, who has become a cold-hearted control freak who wants to be in charge of the lives of her siblings. He witnesses his other children go through other crises like unwanted pregnancy and a vehicular accident that he himself has almost caused, sending Dianne in to a more heated rage.

The biggest predicament is the one involving Amanda, with her revealing secrets about her current situation and her past. Over time, the great wall between Franco and Dianne comes down and they realize that it is not too late for their family to become whole again.

Direk Laurice and screenwriter Ricky Lee have done a great job, giving each character a chance to establish their significance in the story.

At first, Sa 'Yo Lamang looks primarily like a Bea Alonzo vehicle, with her standing out in most of the moments and Lorna Tolentino taking the sidelights. But as the film progresses, we see LT's character develop into a rich and interesting personality and we understand why her character acts a particular way in the beginning. Truly a class act, LT has mastered her craft, and at the same time, effectively supports her co-stars. It is commendable to see how she and Bea complement each other, and when they're in a moment together, it is just heart-wrenching and almost magical.

Much credit should be given to Bea, who has brought life to a spectrum of very different characters in her career and this film has proven that she can rise up to any challenge. In Sa 'Yo Lamang, Bea brilliantly exhibits a range of emotions, from rage when she's with her father, pain and vulnerability with her mother, and half-heartedness and repressed feelings when she's with the men she's romantically attached to (Zanjoe Marudo and Diether Ocampo).


Christopher de Leon also deviates from the acting we've known him for, but still delivers a subdued performance that can make viewers feel his awkward uneasiness. Also notable is how natural Enchong Dee is onscreen that you can see the realness of his character. However, Coco Martin displayed a tendency to go over the top. Despite her small role as Coco's lover, Shaina Magdayao was able to portray intense emotions. It's just too bad that Miles Ocampo did not have the innocent charm Shaina had when the latter was cast as the fresh-faced granddaughter in Tanging Yaman.

It is remarkable to see how a seemingly perfect mother is, in fact just like any other human being, also capable of having imperfections.

Also, Sa 'Yo Lamang kept the religious message to its most realistic and earth-bound influence. While a miracle was a significant device in Tanging Yaman's most important moment, Sa 'Yo Lamang stuck to the real deal, to what we can perceive every day, like love, hope, divine guidance and most importantly, acceptance.

Sa 'Yo Lamang is a solid film that boasts a straightforward storyline and excellent delivery from most of the cast members. Ironically, if this were relased more than ten years ago, it could have looked too melodramatic and old fashioned. It is a risk for Star Cinema to be releasing the film today because it is different from the usual blockbusters and also because this kind of film is usually reserved for the Metro Manila Film Festival at Christmastime where family values are given a trophy and good box office returns. But considering the current crop of romantic comedies or love stories with foreign songs as titles, the film's sincerity and "back to basics" style make it stand out. Its realism is also a welcome break to cure viewers who are suffering from fantasy-genre fatigue.


There are no special effects and grandiose production numbers in this movie. But if you're looking for humanity, emotions and possibly, upliftment and inspiration, Sa 'Yo Lamang will not disappoint.


This film is graded A by the Cinema Evaluation Board and rated PG-13 by the Movie and Television Review and Classification Board.