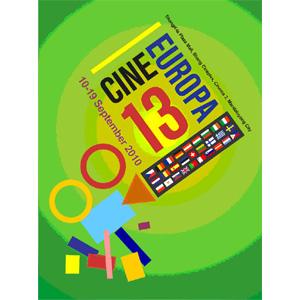 Cine Europa, which started in 1998, remains a distinctive acknowledgement of the partnership of the European Union with the Philippines. For 13 years now, it has been sharing with the Filipino public the diversity and uniqueness of European film culture. Admission to the screenings is free on a first-come, first-served basis.

Cine Europa, an annual event that brings excellent films from 17 European countries to the Philippines, gets bigger and better as it turns 13.

Opening on September 9—with public screenings from 10th to 19th at the Cinema 2 of Shang Cineplex in Shangri-La Plaza Mall, Mandaluyong City—the film festival aims to give the Filipinos more than a glimpse of Europe's rich culture through the silver screen.

This year's selection of movies, carefully handpicked to cater to the tastes of Pinoys, covers a wide breadth of emotions—love, laughter, hope, despair, survival, courage, and even steadfastness.

THE OPENING NIGHT. Opening the festival is a Belgian love story-thriller titled The Kiss by director Hilde Van Mieghem and Ides Meire.

Ambassador Alistair MacDonald, head of the delegation of the European Union to the Philippines also related the participating countries, "Cine Europa 13th edition is most significant as it welcomes films from Bulgaria, Greece, and Slovakia, in addition to films from Austria, Belgium, the Czech Republic, Denmark, Finland, France, Germany, Romania, Italy, Spain, Sweden, the Netherlands, United Kingdom, and Switzerland, which has showcased European culture at its fullest."

SPECIAL SCREENING. And to foster a more vibrant and engaging rapport with Filipino stakeholders in the industry, the Goethe Institut in Manila will hold a special screening of The Laughing Star on September 15 at the Alliance Francaise, Makati City.

The film is a documentary of multi-awarded German film maker Werner Schroeter that tackles Philippine history starting from the Spanish revolution to the Marcos regime. The idea came about after he was invited to the Manila International Film Festival in 1983, and got completed after consultations with the UP Film Center and friends from the Philippine movie industry as well as historical research.

Unfortunately last April 12, Mr. Schroter died. He could no longer fulfill his wish, which is to come back to the Philippines. But his good friend, Austrian Peter Kern, also the producer of Laughing Star, is continuing his legacy.

Aside from viewing European films for free, guests will have the chance to win one economy ticket to Europe, courtesy of KLM Royal Dutch Airlines.

Cine Europa 13 is presented by the European Union Member States' embassies and consulates, Embassy of Switzerland, Delegation of the European Union to the Philippines, the Shangri-La Plaza Mall (Manila), Arts Council of Cebu and Liceo de Cagayan de Oro (Mindanao) as partner organizations.