Marian message in The 13th Day: watch a movie, feed a child 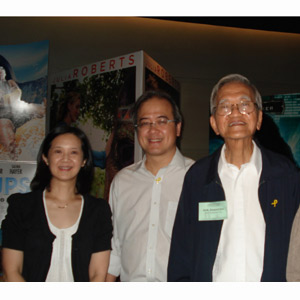 The 13th Day, a movie about Lucia and her visions of the Blessed Mary, will be screened at Ayala Malls Cinemas starting September 8. The supporters of the project "Watch a Movie, Feed a Child" include (from left) Viel Aquino-Dee, vice-president of the Assisi Development Foundation (ADF); Richard Dee, board of trustee of ADF; and Ambassador Howard Dee, chairman of ADF.

Decades after the apparition in 1917 at Portugal, the Church brings anew The 13th Day--a movie by Dominic and Ian Higgins that retells the story of the Lady of Fatima thru the memoirs of one of the three seers, Lucia.

Reliving the faith that has inspired thousands, the Church calls on the nation to witness and experience the incredible, emotionally-charged and often harrowing world of three young children--Lucia, Francisco and Jacinta--who were chosen to carry the message of hope and whose choice was to remain loyal to their beliefs, even in the face of death.

In celebration of the nativity of the Blessed Mother Mary, the Assisi Foundation thru its Hapag-Asa Feeding Program (a project of Pondo ng Pinoy) brings the movie to Ayala Malls Cinemas starting September 8. The Church calls on Filipinos to rescue children who are hungry through the project dubbed "Watch a Movie, Feed a Child."

"If Jesus was here, he would have said 'Thank you,'" enthused Ambassador Howard Dee due to the overwhelming support at the movie's screening. In his opening remarks, Ambassador Dee mentioned the Biblical passage Matthew 24:35, 40, which states: "For I was hungry and you gave me something to eat, I was thirsty and you gave me something to drink...I tell you, whenever you did this for one of the least important brothers of mine, you did it for Me!"

Reminding the nation of the Marian message and in support of Hapag-Asa's Feeding program, the Church invokes Filipinos to see the movie The 13th Day when it opens in cinemas. The two-pronged mission of the movie's release is further supported by the cinema tickets' lowered price at P75 (for bookings) and P100 for walk-in patrons. In full support of the cause, Ayala Malls Cinemas will donate their share of the movie to Hapag-Asa as well.

Hapag-Asa is a Pondo ng Pinoy project managed by Assisi Development Foundation in response to a call to help mitigate the malnutrition prevalence among children in the Philippines that has remained alarmingly high in the last 10 years.


In an article from the Philippine Institute for Dev. Studies, the case of children aged 6 to 10 is somewhat getting worse as well. The percentages of underweight and stunted rose in 2008. The increases were significant. For underweight, the rate went up from 22.8 percent in 2005 to 25.6 in 2008 whereas the percentage of stunted went up to 33.1 from 32.0. Though these recent increases (both those for 0-5 and 6-10 years old) seem to be parts of regular up and down movements that can be visually deduced from the data, they reveal, nonetheless, the lack of sustained efforts in these areas. Being underweight increases the risk of death or impaired cognitive development of Filipino children whose future and our country's future are at stake.


According to the World Health Organization, malnutrition prevalence of 5% is considered of public health significance. The program has an education and livelihood components for the parents of the enrolled children who are given seminars/teachings on affective parenting, livelihood and skills training; health and nutrition; values formation to ensure that the parents can better take care of their children even after the six-month feeding.