Will the characters of Enchong Dee and Erich Gonzales tie the knot in I Do? 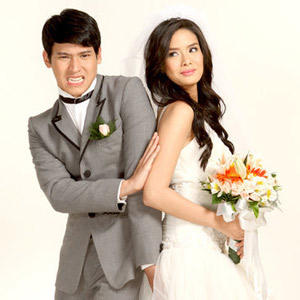 From the tear-jerker movie Sa 'Yo Lamang, Star Cinema promises to bring laughter and romance to viewers in its newest 17th anniversary movie offering titled I Do. This will be the launching movie of young actors Enchong Dee and Erich Gonzales as a love team.

Both young actors are excited about I Do since it will be different from projects they've done in the past. Their previous TV shows—Katorse, Tanging Yaman, and their current primetime series Magkaribal—were all heavy drama. Enchong was also part of the family drama Sa 'Yo Lamang; he played the son of Lorna Tolentino and Christopher de Leon.

I Do, according to Enchong, is inspired by a true story of young lovers who were willing to fight for their relationship. He pointed out, "Makikita nila kung gaano katotoo 'yong mga nangyayari sa mga nag-iibigan sa panahong ito."

Since this is their launching movie and the first mainstream film of Erich, the young Kapamilya stars admit that they feel a bit pressured to do well on the box-office.

But he says that they tend to forget about it once they arrive on the set because their co-actors are always fun to work with.

WORKING WITH THE DIRECTOR. Aside from their relationship with their co-actors, the lead actors related how I Do director Veronica Velasco makes their job easier by accepting their opinions about the scenes that they have to do.

I Do is the first mainstream movie of Erich and Enchong together. They first appeared as a couple in the 2009 Cinema One Originals entry Paano Ko Sasabihin?