Philantropique shows the comic relationship between vanity and beggary 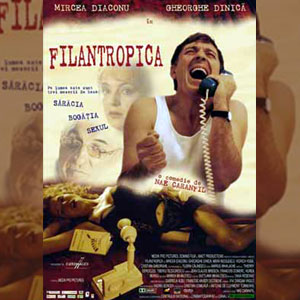 Catch Philantropique and many more films will be screened at the Cine Europa 13 starting Friday, September 10. It is directed and written by Nae Caranfil. (CLICK HERE to read more about this year

As a child, I remember how strangers in the street would approach me and ask for alms. The number of times, I cannot tell. Some extend an upraised palm in silence; others tell a tearful story to tell. The sympathetic nature kicks in and I automatically dole out whatever spare change.

In my later years, I have learned of consortiums running everything, from big time businesses down to sampaguita vendors. But only recently have I discovered that even organized beggary exists. This may be nothing new to you, but for me this is as surprising as the creativity involved in the exploitation of gullibility and charity.

The 2002 Romanian film Philantropique gave me a clear understanding of how such beggars operate, and the witty representation on the main character's road to becoming a professional in this field made me laugh and at the same time, think.

Philantropique is about Ovidiu Gorea, a 35-year-old high school teacher and a struggling novelist. He still lives with his parents and leads a dull life. However, an incident with one of his students (Robert) leads him to fall for Robert's sister Diana. Diana is a commercial model and Ovidiu, thinking that girls like her are into rich guys, tries his best to impress her by leading an extravagant lifestyle.

Now the big question is how to pass himself off as a rich man. Ovidiu soon feels the pressure when nobody would buy his books, even at discounted prices. The downcast Ovidiu bumps into a poem-reciting drunk beggar and discovers that the beggar earns much more than himself. How do you do it? Ovidiu asks. The drunk points him to Filantropica Foundation, a "foundation"headed by creative ex-convict Pavel Puiut.

Pavel teaches the reluctant Ovidiu the ways of organized beggary and shows him how to profit from it. In time, he racks up more money than he'll ever earn and proceeds to give Diana expensive dates with the intention of sleeping with her. But things don't go well for Ovidiu in the long run, as extravagance and becoming his own gullible victim gets the best of him.

THE REVIEW. Philantropique displays man's vulnerability and the struggle to feed pride and praise, even if it means sacrificing ones' dignity. The portrayal of Romania's poor and rich differs little from the Philippines' economic stratification. Ovidiu's situation in the film is similar to that of the working middle class, and it's wonderfully refined and comically presented, minus exaggeration.

The actor (Gheorghe Dinică) who plays Pavel certainly brings the icing on the cake. His scene with some vagrants and the sad tale he invents for each of them is hilarious and pitiful at the same time.

Mircea Diaconu's (Ovidiu) performance elicits the viewers' sympathy for his pitiful moneymaking scheme, regardless of his intention and goal on what to do with the money. I can imagine his pressure to be a made man and his desperate actions to be one for at least a few days. That made me say, "It's a risk. But it is one I'm also willing to take!"

The story is simple, yet the surprise along the way is overpowering. It teaches about greed, gullibility, and consequence in the form of a new life one can't get away from. After the laughs, I thought that such situations may actually be happening right now. The movie is certainly both funny and thought-provoking.

Philantropique is bittersweet, a damn good execution of a story laden with creative and realistic goodness. Where else would you find a good story about a failed novelist and his toothpaste-model love interest?

(CLICK HERE to read more about this year's Cine Europa)