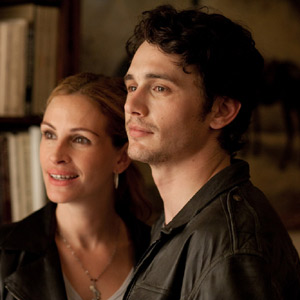 "The first scene we shot together we made out, and by the end of the day we broke up. It was very intense," says James Franco about his scenes with Julia Roberts for the movie Eat Pray Love.

In the film, Liz Gilbert (Roberts) is a modern woman on a quest to marvel at and travel the world while rediscovering and reconnecting with her true inner self. At a crossroads after a divorce, Gilbert takes a year-long sabbatical from her job and uncharacteristically steps out of her comfort zone, risking everything to change her life. In her wondrous and exotic travels, she experiences the simple pleasure of eating in Italy, the power of prayer in India, and, finally and unexpectedly, the inner peace and balance of love in Bali.

Eat Pray Love starts off in New York, where the reasons for Liz's need to get away is explored and established through her relationships with two men: her ex-husband, Stephen (Billy Crudup), and her lover, David.

"Liz and Stephen is a couple that has fallen out of love--they have material blessings, but they want different things in life," explains director Ryan Murphy. "They're not meant to be together, but this does not make their time together any less valuable or worthwhile.

In turn, Franco's character, David, adores Liz and rekindles her passions that she thinks have disappeared from her life. Producer Dede Gardner strongly believed that if you don't like who she goes off with after walking away from her husband, the story isn't going to work. "There was no one else in the world to play this part," she says. "James is adorable and sexy, but also very cerebral, with an enormous beating heart and generous spirit."

"When David and Liz meet, Liz is searching on a lot of levels," says Franco. "She's looking for a way to connect to someone romantically, but also some deeper, spiritual meaning in her life. Maybe it's not a relationship that's going to last, but it sets her off on her journey, so there are positive things that come out of it."

Franco and Roberts had their challenges as they had to dive in very quickly to their chemistry as a couple. Says Franco, "The first scene we shot together we made out, and by the end of the day we broke up. It was very intense."

Franco is best known for his starring role as Harry Osbourne in Sam Raimi's Spider-Man trilogy. He was last seen starring opposite Sean Penn in Gus Van Sant's Milk in which his performance earned an Independent Spirit Award for Best Supporting Actor. He was recently nominated for a Golden Globe for his role in David Gordon Green's comedy Pineapple Express where he starred opposite Seth Rogen.