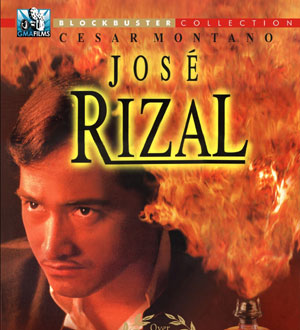 Jose Rizal. That is the name of the 19th century revolutionary mortal who in the span of his 35-year existence rose to become one historical immortal. So it is quite daunting how a group of talented individuals stood up to the challenge of surmounting expectations in making Rizal's film biography.

With some of the country's foremost veterans at the helm, Jose Rizal gave the impression of a gathering storm on the verge of breaking cinematic records. And break it did as it won more than 70 local and international awards. Part of the film's excellence is due to Cesar Montano who exhibited a breathtaking performance of Rizal's triumph and tragedy, immensity and compassion. In various quantities, Jose Rizal proved toxic, what with its unorthodox layering and flashbacks.

But director Marilou Diaz-Abaya took a huge risk invoking bold techniques, stitching together Rizal's life with his opuses Noli Me Tangere and El Filibusterismo in avant-garde fashion. The result of which could disarm even the starkest of critics.

Montano's voice-over dialogues silently open the film before being plunged into the monochromatic world of his novels. In these pages, Rizal takes everything into his own hands where he is the master allowing his marionettes to speak of the political panic and struggle for freedom. The initial scene where Rizal is depicted in Belgium completing his novels signals the creative direction in which Diaz-Abaya, writers Ricardo Lee, Jun Lana, and Peter Ong Lim, and producers Butch Jimenez and Jimmy Duavit have decided to partake.

Soon enough the flashbacks start rolling in. Stabbing in consistent strokes, images of political and religious persecution materialize from characters of Noli Me Tangere. His alter-ego Crisostomo Ibarra/Simoun (Joel Torre) shares the same limelight. It's part biography, part book adaptation. Jose Rizal refuses to fall into the traps of usual film biographies. There is no neglect on Rizal's whole persona. He is shown as a writer, a brother, a son, an artist, a doctor, a student, and even a lover. Thus, the smorgasbord, which could be the downfall of some, is balanced by the good taste in selecting outstanding actors: Gloria Diaz as the caring Teodora Alonso, Gardo Versoza as the spontaneous revolutionary Andres Bonifacio, Pen Medina as the overtly protective older brother Paciano (whose younger version is played wonderfully by real life son Crispin Medina), and Peque Gallaga as the menacing Archbishop Bernardo Nozaleda to name a few.

But in the duration of the film, two characters brought compassion to Rizal in his dire times in prison. Luis Taviel de Andrade, impressively played by Jaime Fabregas, is the thought-provoking, mustached defense representative of Rizal. Their constant conversation rouses aggression from both of them but nevertheless arcs into a fully formed understanding of the other's purpose.

The other is an apparent grain compared to Rizal's magnitude. Jhong Hilario is the prison aide who takes interest in Rizal's ideology to simply do what is right and he nurtures the kid's thirst for answers.

But even as the film covers a lot of Rizal's groundwork-the permeation of the novels with actual reality, most notably the cathedral scene where Leonor Rivera (Mickey Ferriols) walks down the aisle while Maria Clara (Monique Wilson) sings mournfully for her unfortunate seclusion thereafter committing the infamous suicide-it nonetheless conveys a powerful and sad ode to independence driven by creative vision and unwavering will.

Marching to his death, Rizal calmly acknowledges the destiny he has wrought for himself. Accompanied by his wingman Taviel, there is no look of intimidation about Rizal, only bizarre satisfaction at what his poetry-words and philosophies-have done to the nation. For him, there is always a greater need to fulfill than one's ambitions.

The strenuous visuals and script commendably tackles the period's issues soundly, without sacrificing the focus on Rizal as the intense medium for change. This world-class film has survived the formulas of related ones before in that "Jose Rizal" is distanced from its contemporaries mostly because it draws its value in the patriotic and emotional angle of a hero's vulnerability.