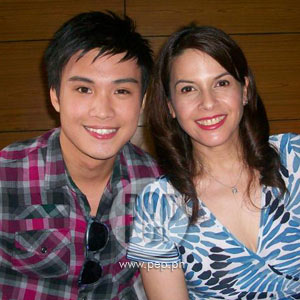 Edgar Allan Guzman shot a steamy love scene with Rita Avila for Magdamag. This film, based on a Palanca award-winning screenplay, will be screened in cinemas starting September 15, 2010.

Edgar Allan Guzman is best remembered as the last Mr. Pogi grand winner in the long-running noontime show Eat Bulaga. And he has certainly gone a long way since winning in 2006.

The young actor has starred in various drama projects where he has proven his mettle as a promising young actor and has acted in movies opposite Robin Padilla, Dennis Trillo, Sid Lucero and other formidable actors. He got noticed for his performance in Astig, which brought him from the Cinemalaya stage all the way to the Pusan International Film Festival in Korea and the Osaka Asian Film Festival in Japan.

Now, Edgar faces a new challenge as he stars in a difficult two-character film titled Magdamag opposite Ms. Rita Avila. The film was one of the Network for the Promotion of Asian Cinema (NETPAC) entries at the 6th edition of the Cinemalaya Philippine Independent Film Festival.

This film is based on a screenplay done by Jerry Gracio, who won 2nd Prize in the category Dulang Pampelikula of the 60th Carlos Palanca Memorial Awards for Literature. Jerry previously wrote the screenplays of Astig, Santa Santita, Emir and Muli.


In Magdamag, Edgar portrays the role of a fire dancer who barely finished high school. He had a chance of meeting a married woman in Boracay during Holy Week. They spent one sizzling night together. That one night of passion would put their basic beliefs and values into test, questioning their morals, and in the end, would help them decide on the most pressing issues confronting their lives.

The movie requires Edgar and Rita to have passionate love scenes, which were done in good taste under the guidance of director Joven Tan and cinematographer Romeo Vitug.

How did Edgar get past the awkwardness of doing a love scene?

Besides, Edgar told himself that the script of Magdamag was written specially for him by Jerry Gracio so he'd better make good. So matter the nervousness, when the time came for him and Rita to do the love scene, they just did it as they see fit, with the guidance of their director.

"I was willing to do the love scene kasi hindi naman ganoon ka-grabe ang execution compared on how the scene was described on the the script," recalled Edgar. "I must admit na hindi pa ako handang-handa sa paggawa ng love scene when I did Magdamag but I was able to pull it off at okay naman ang kinalabasan. Pero pag ready na ako, gagawa talaga ako ng pelikula na talagang mature ang role ko."

How did you prepare for the love scene? "I did it by putting myself in the character. Besides, I like the story. Saka wala naman malisya sa paggawa ng love scene. I know we will be doing love scenes in the movie. Mas grabe pa ang nga love scene based on how it was written in the script. Pero hindi na muna ako gagawa ng daring na love scene after this movie," he said.

How did you feel while doing the love scene?

When it comes to accepting acting roles, whether in the movies or in television, Edgar wants to experiment. He is not afraid to tread on dangerous grounds. The more edgy, the better, as he finds more challenging.

How is it working with Rita Avila?

Doing Magdamag is part of Edgar's experiment when it comes to accepting acting assignments. He went daring by agreeing to do kissing scenes and love scenes. Likewise, in the TV5 sitcom Lady Dada, Edgar plays a gay character, a drag queen who works in a comedy bar.


Aside from doing a gay role in Lady Dada, Edgar also wants to do an action film similar to Engkwentro, the award-winning Pepe Diokno film that featured Felix Roco in the title role. "I want to do varied roles so that I could sharpen my skills as an actor," Edgar added.

Going back to the story of Magdamag, is it possible for you to fall for a woman older than you?

Among the mature women you've met, who are you most attracted to?

Magdamag will be shown in cinemas starting September 15, 2010.