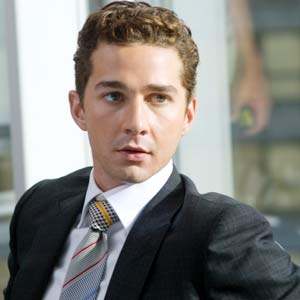 Shia LaBeouf delved into the world of finance and became a licensed broker-dealer in preparation for his role in Wall Street: Money Never Sleeps .

Jake Moore (Shia LaBeouf) may be worth millions at a ludicrously young age but he is also keen to do some good in the world by investing in green energy amid a fascinating world intoxicated by the sheer thrill of as much money as possible.

In Oliver Stone's Wall Street: Money Never Sleeps, LaBeouf's Jake is a honest trader who gets embroiled in ominous financial dealings that is bound to spin dangerously out of control. With Michael Douglas' Award-wining role Gordon Gekko out of prison and Josh Brolin's Breton James, Wall Street: Money Never Sleeps multiplies greed and avarice where there is no such thing as 'enough.'

Wall Street 2 steers Jake Moore (LaBeouf), a smart young proprietary trader into making millions at the venerable Keller Zabel Investments, run by Louis Zabel (Frank Langella), Jake's mentor. Jake's girlfriend, Winnie (Carey Mulligan), meanwhile, is supportive of his drive--fueled by an idealism she finds lacking in her father Gordon--to invest in green energy. A wave of rumors that Keller Zabel is stuck with billions in toxic debt causes the company's stock price to suddenly nose-dive, and Louis Zabel is forced to fight for his company's life. When the government refuses a bail-out, Bretton James (Josh Brolin), a ruthless billionaire and master manipulator, arranges a takeover of Keller Zabel for a fraction of its worth. This move then propels Jake to avenge his losses by finally forging an unlikely alliance with Gordon.

To play the role of Jake, Oliver Stone cast Shia LaBeouf, star of the hugely successful Transformers films, as well as the recent Indiana Jones and the Kingdom of the Crystal Skull, and the thriller Disturbia. "He reminds me of a young Tom Cruise [with whom Stone worked on Born on the Fourth of July]," says Stone of LaBeouf--"The same drive, work ethic, and energy."

LaBeouf was drawn to the role of Jake for several reasons, including his admiration for Stone's body of work. "I love 'Wall Street' - I'm here because of it," says the actor. "As a movie fan, you learn a lot watching Oliver's movies. You get a lot of facts as well as entertainment."

In addition, starring in an Oliver Stone film was a change of pace for the young actor. "I've been making fantasy films for a while," he explains. "I wanted something with teeth, and Oliver Stone makes movies with teeth."

LaBeouf describes Jake as someone who comes from a modest background, and whose tenure as a caddie for Louis Zabel, the head of the esteemed investment bank Keller Zabel, would lead to much bigger things. "Jake is a guy who came from nothing, in Long Island, with a father who's non-existent," the actor explains. "Jake was hired right out of business school and put into Keller Zabel as a proprietary trader, and starts trading his own account. He works his way up the ladder and becomes Zabel's right-hand man at a young age."

"When I took the movie I knew little of the world of finance--I didn't know what a derivative was, I didn't know stocks, bonds," he continues. "Oliver said, 'If you want to do this you'd better get cracking [and do your homework],' and I walked into a brokerage house office and asked them to set me up an account."

LaBeouf then dove into his research with zeal. After what amounted to an intensive course in finance at various investment and trading houses, LaBeouf made a modest investment grow exponentially. He also passed his Series 7 test, becoming a licensed broker-dealer.

"It is amazing. I come from poverty. My mother laughs about it all the time. She went on welfare; we had no money and now I'm trading upwards of $300,000 in the morning. It's outrageous. It's really outrageous. My Mom's happy as a clam," LaBeouf concludes on the current state of his career.