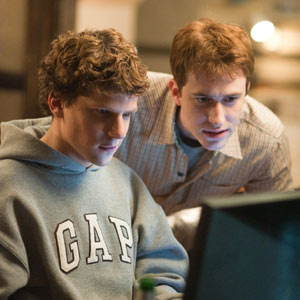 The Social Network depicts how the popular networking site, Facebook, was created by Harvard students in 2003. It was chosen to be the opening film of the 23rd Tokyo International Film Festival as well as the 48th New York Film Festival.

Columbia Pictures brings to the screen The Social Network, the controversial and acclaimed film detailing the Harvard dorm room origins of social media megasite Facebook, which is valued today at a staggering $16 billion.

On a fall night in 2003, Harvard undergrad and computer programming genius Mark Zuckerberg sits down at his computer and heatedly begins working on a new idea. In a fury of blogging and programming, what begins in his dorm room soon becomes a global social network and a revolution in communication. A mere six years and 500 million friends later, Zuckerberg is the youngest billionaire in history. But for this entrepreneur, success leads to both personal and legal complications.

What follows is a drama rife with both creation and destruction; one that purposefully avoids a singular POV, but instead, by tracking dueling narratives, mirrors the clashing truths and constantly morphing social relationships that define our time.

Drawn from multiple sources, the film moves from the halls of Harvard to the cubicles of Palo Alto as it captures the visceral thrill of the heady early days of a culture-changing phenomenon in the making--and the way it both pulled a group of young revolutionaries together and then split them apart.

In the midst of the chaos are Mark Zuckerberg, the brilliant Harvard student who conceived a website that seemed to redefine our social fabric overnight; Eduardo Saverin, once Zuckerberg's close friend, who provided the seed money for the fledgling company; Napster founder Sean Parker who brought Facebook to Silicon Valley's venture capitalists; and the Winklevoss twins, the Harvard classmates who asserted that Zuckerberg stole their idea and then sued him for ownership of it.

Each has his own narrative, his own version of the Facebook story--but they add up to more than the sum of their parts in what becomes a multi-level portrait of 21st Century success--both the youthful fantasy of it and its finite realities as well.

Directed by the Oscar-nominated David Fincher (The Curious Case of Benjamin Button), The Social Network stars Jesse Eisenberg (Zombieland) as Zuckerberg, Justin Timberlake (Shrek The Third) as Sean Parker, who became Facebook's founding president; and Andrew Garfield (Lions for Lambs, Spider-Man 2012) as Eduardo Saverin, the Facebook co-founder who fell out with Zuckerberg over money.

The film is written by Aaron Sorkin (A Few Good Men) based on the novel The Accidental Billionaires: The Founding of Facebook--A Tale of Sex, Money, Genius, and Betrayal by Ben Mezrich.


The Social Network was chosen to be the opening film of the 23rd Tokyo International Film Festival as well as the 48th New York Film Festival.

Opening soon across the Philippines, The Social Network is distributed by Columbia Pictures, local office of Sony Pictures Releasing International.