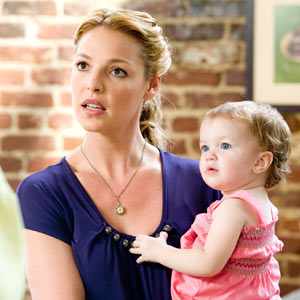 The life of Holly (Katherine Heigl) is turned upside down when she is suddenly tasked to take care of her goddaughter in the upcoming film Life As We Know It.

Warner Bros. brings Katherine Heigl (The Ugly Truth) and Josh Duhamel (When in Rome, Transformer ) together in the endearing romantic comedy Life As We Know It.

In the film, Holly Berenson (Heigl) is an up-and-coming caterer and Eric Messer (Duhamel) is a promising network sports director. After a disastrous first date, the only thing they have in common is their dislike for each other and their love for their goddaughter, Sophie. But when they suddenly become all Sophie has in the world, Holly and Messer are forced to put their differences aside. Juggling career ambitions and competing social calendars, they'll have to find some common ground while living under one roof.

"The story is about these two people who are set up by their mutual best friends," Berlanti explains. "They definitely don't hit it off. Many of us have had a date like that, where things just go more and more awry. But then, early on in the film, due to some unforeseen circumstances, these two individuals, who started out despising each other, are forced to raise their friends' child together."

Heigl and Duhamel play Holly and Messer, who couldn't be more different. Holly is a sober, serious young woman who runs a boutique bakery, and Messer is a consummate and content bachelor working as an on-the-spot editor during Atlanta basketball games. "They have a history with one another because years ago their two friends had set them up on a blind date and it went really bad," says Heigl. "Not just uncomfortable or 'We didn't connect; we didn't like each other,' but really bad."

"They just didn't jive right from the beginning," adds Duhamel. "They don't even make it out of the driveway to go to dinner. It goes bad that quickly. So, over the next few years you see them being forced into situations where they have to see each other, whether it's their friends' wedding, or the delivery of their first child, Sophie, or first birthdays, whatever it is. He's not going to go to this party because she's there. He's going to go because Peter's his best friend. I'm going to be there, but Holly happens to be there, too, so it's really kind of chilly and not very civil, I guess. They're just two people that would not ever hang out by their own decision."

The emotion at the core of the story, along with the inherent comedy of the characters and the situation in which they find themselves, resonated with Heigl. "We've all had moments in our lives where we've been through some difficult things, but there's still laughter," she notes. "And a lot of times that's how people get through some of the harder times in their lives."

Opening soon across the Philippines, Life As We Know It is distributed by Warner Bros. Pictures, a Warner Bros. Entertainment Company.