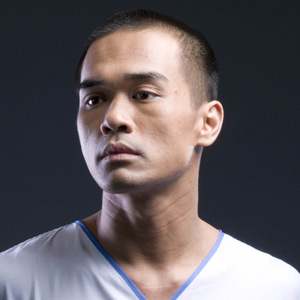 Marc Abaya, the vocalist of Kjwan, says that he is inclined to do acting now and is open to pursuing a film career in the future.

Marc Abaya, the lead vocalist of Kjwan Band, started his music career as a member of the Sandwich Band in 1998 when he was still in college, taking up Communication Arts in Ateneo. With two big names in the showbiz industry as parents (director Marilou Diaz-Abaya and ace cinematographer Manolo Abaya), it seems natural for Marc to gravitate towards a career in showbiz.

"Our parents raised us independently and since mahilig ako sa music, I felt it was the avenue na sa akin lang. At the same time, I felt my dad would be proud of me if I would go to music kasi mahilig si Dad sa rock music," ani Marc sa panayam sa kanya ng PEP (Philippine Entertainment Portal) last week sa isang special concert na ginawa ng Kjwan Band together with Spongecola and Itchyworms for the members of the entertainment press.

"Laging nagpapasikat sa akin si Dad about rock music, dapat daw pakinggan ko ito. As I was growing up, I felt that playing music was making my parents happy. And then, it was a blessing that it worked out," pahayag ni Marc about his music career.

"Tapos biglang all of a sudden, nakasama akong nag-perform sa UP Sunken Garden, 20,000 people watching. But the gig went well naman. Doon ko po na-realize na parang maybe I can make this a living because I got paid din po there. I was still in college so wala pa naman talaga akong income that time," kuwento ng vocalist ng Kjwan Band.

"Pero talagang na-depress ako, nalungkot ako. Let me tell you a story, this is very romantic. In one of the subways, may mga nakita akong musikero. Ang gagaling! Natauhan lang ako. Eto 'yung mas magagaling sa akin but who is not known. For me, in the Philippines, I was able to achieve something. Siguro dapat kong balikan ang pagiging musikero. It's not a cop-out.


"Maybe I will pursue film again in the future but for now, it made me realize na not everybody has that luck. I think naman at the end of the day, to be blessed with luck is an act of God. I figured lang na balak ko na ituloy muna ito and see it through, otherwise I would be wasting it. At least, I am able to explore other fields, recently lang po, yung pag-aartista, hosting and MTV came along. Now I am more inclined into acting," kuwento ni Marc.

"Probably, but at first, the funny thing was, noong hindi pa kami kilala as a band, nobody knew [Marilou Diaz-Abaya] was my mother. Noong pumatok ang banda, they were saying, "Oh, ganito lang iyon dahil kay direk." But my mother has never been to any of my gigs although my parents are totally supportive. It's just that again, like my mother, and my father, they are important as they were. For me, parang Diyos ang mga magulang ko and I love them," pahayag ni Marc.

"We were raised na we do what we have to do pero pagdating sa bahay, we are normal. Nandoon ang guiding factor ni Mommy, as long as hindi ka nakakasakit ng tao. And if I chose to do anything that has to do with entertainment, ang pinakamahalaga, mas mahalaga sa sarili ay 'yung tao, Kasi kung hindi sila mahalaga, balewala ang ginagawa ko. Magbabanda na lang ako sa garahe. Bakit pa ako naging musikero if I can't share it? And if people don't understand and they don't enjoy, then it's my fault. I have to do better. I have to do continuously better with what I do. "

So how do find your stint as an actor?

"Very scary po, especially na ang mga nakakasama ko ay mga senyores like Angel Aguino, Bea Alonzo. I mean, my God, ang gagaling nila. Mabuti na lang I was very fortunate to have worked with him [Johnny Delgado] before he passed away. I also worked with Direk Laurice [Guillen]. I also did a couple of indie films. Lalabas iyong isa sa November. It's titled Dagim, directed by Joaquin Valdez. It's a Cinema One Originals entry."

How were you convinced to do that film?

"Kasi po, nakatrabaho ko si Joaquin early this year. Ginawa niya ang music video namin, the first single from our third album. After that, nagkaroon na kami ng rapport kasi pareho ang interest namin, and the reason why I got him to do our music video was because I saw a film by Sid Lucero titled Bulong na ginawa ni Joaquin. And when I saw it, I told myself it's a science fiction movie and nobody could do it except Joaquin. I've never seen it here so bumilib ako sa kanya. After we did the music video, we would go out together. The next time I knew he made me audition, the first time I did audition for a film role. And then I did get the role," kuwento niya.

"Honestly, no. I just told 'yung ka-close ko talaga, my father. He's my buddy. I love him to death. With a word he can break me, he can make me happy and he's talaga my partner in crime. Si Mom talaga, parang teacher, the teacher that I would have to pass. If it's good, ipapakita ko sa kanya, if not then hindi," wika pa ni Marc.

Nakuha raw niya ang passion niya to do his best in whatever he does from his parents na parehong artists. Hindi naman sinasabi ni Marc na mahirap ang situation or set-up in a household na cinematographer ang tatay at director naman ang nanay. Pero he admitted it's a unique situation.

"I didn't know how different it was growing up with my family until noong high school, I get close na to other people, you get to hang out with their family and you get to know their life. Ibang-iba ito from my family. But realizing na iba ang family background ko, parang mas na-in love ako sa family ko kasi unique ang family ko," pahayag ng singer.

But even after you knew that your parents were into filmmaking, hindi mo ba naisip na mag-artista?

"Hindi pa po, pero I noticed lang na when I perform, I act. And then later on, I just realized that I like being a musician but I'd like to do more. I don't want to be stuck with one thing. At the risk of people saying, 'Ano ka ba, musikero ka ba o artista?' My point is, may mga tao like Francis Magalona, a great man. He did everything. He paved the way. Why be good at one when you can try to be good at many?

"It's very enriching to work with different directors pero I realized how important it is to have rapport with the director. Hindi lang dapat yung artista ang nagdadala o yung director lang. Dapat silang dalawa. There should be chemistry not just between actors but between the director and the actor as well."

"Yes, actually, I enjoyed it very, very much. But what I like for now is, ang maganda sa indie film scene is the freedom. If you want to invest in an indie director, in a film that is not safe, mas nagiging ganado ako and I hope it works out," wika ni Marc.

"What I love now as an actor is that you actually have choice to pick your role. Di gaya before na sisindakin ka ng manager mo,'kailangan mo itong gawin.' Now you have the freedom. But you better be good. Huwag mo sasayangin ang trust na ibinigay sa iyo. You should not disappoint the people who believe in you. I don't know what would be the next one. I am just waiting for the script. Kung may dumating man, ang isang role na gusto ko ay 'yung villain na maawa ka. More than playing the hero, I'd like playing the broken hero. Mas gusto ko ang character na nato-torture ako. Mas gusto ko na nahihirapan ako," pagwawakas ni Marc.