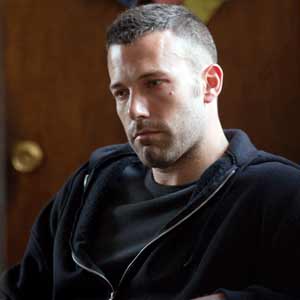 Ben Affleck stars and directs the crime film The Town, which is set in a working-class Boston neighborhood.

After completing his directorial debut in the Oscar-nominated Gone Baby Gone, Ben Affleck now directs and stars in another stirring crime thriller, The Town.

In the film, Doug MacRay (Affleck) is an unrepentant criminal, the de facto leader of a group of ruthless bank robbers who pride themselves in stealing what they want and getting out clean. With no real attachments, Doug never has to fear losing anyone close to him. But that all changes on the gang's latest job, when they briefly take a hostage—bank manager Claire Keesey (Rebecca Hall).

When we meet Affleck's character, he and his crew are in a van outside the Cambridge Merchant Bank, seconds away from their next robbery. In Affleck's words, Doug is "banging against the walls of his own life, still doing the stuff he knows is bad for him but unable to change."

Affleck continues, "He had a shot at a different future—he had a chance to play pro hockey—but he self-destructed. He got addicted to drugs and spun out, so instead of getting out, he came back and, in spite of himself, ended up even deeper in it. That's where we find him. He's cleaned up a bit, in terms of getting sober, and he wants to leave, but he can't escape his circumstances."

"That's what was most intriguing about this guy," co-screenwriter Aaron Stockard asserts. "He is at a point in his life where he realizes if he doesn't leave, he's never going to change. It's not just that he doesn't want to go to prison or, worse, get killed, which is what will inevitably happen if he stays in Charlestown and continues to do this sort of work. What he wants more than anything is to be a different person."

"Part of where he is in his life is a function of how and where he grew up," Affleck relates. "His mother left, his father was in this life; and Doug wound up doing the same thing as the friends he grew up with. It doesn't excuse it, but hopefully you see the shades of gray in the reasons he ended up where he is. It's not just cut-and-dried."

"Ben really understood Doug's psychological and emotional journey," producer Graham King says, "so when he said he was interested in playing the role, we knew there was no one better. I was blown away, not only by how Ben depicted the arc of the character but by the intensity of his performance."

Cast member Jeremy Renner who plays Jem, says that Affleck—both as a director and as a castmate—made portraying the enduring friendship between Jem and Doug a natural. "I felt like I was working with one of my best friends. Ben empowered me to do whatever I thought was right, and if it worked, he got so excited. He set an amazing tone and made everyone feel relaxed and comfortable. It was great."

Another co-actor, Pete Postlethwaite who plays crime lord Fergie Colm, has high praise for his director, saying, "Ben's ability to reflect the technique of acting in his direction is an actor's dream. He knew when you felt you had gotten it wrong and would like to go again, but, better still, he knew when it felt right and there was no need. I'd leap at the chance to work with him again on his next film."

Opening across the Philippines on October 6, The Town is distributed by Warner Bros. Pictures, a Warner Bros. Entertainment Company.