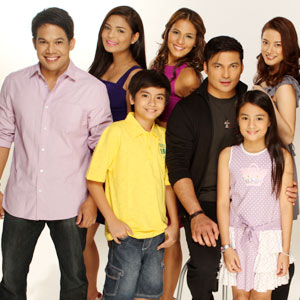 "To have that chemistry sa horror film na ito, it was nice. Dapat we hate each other kasi we're in a competition pero behind-the-cameras, sobrang okay ang pinagsamahan namin," says Mo Twister (leftmost) about his "fellow reality contestants" in the horror flick White House. The other cast members of White House are (from left, clockwise from left) Lovi Poe, Iza Calzado, Maricar Reyes, Gabby Concepcion and Jairus Aquino.

Aloy Adlawan led a team of writers who actually stayed in a haunted house in Baguio City for a few days. The imposing structure, located along Leonard Wood Road in Baguio City, has become one of the distinctive landmarks of the City of Pines. Built in the 1920's, the ancestral mansion was formerly owned by the Laperal family, one of the oldest clans in Baguio.


During World War II, most members of the family were reportedly brutally murdered in the house. Since then, the White House has remained uninhabited because of supposed supernatural occurrences.


The result of the team's immersion is the upcoming horror thriller of Regal Films titled White House.


Directed by Topel Lee, White House focuses on contestants who join a Pinoy horror reality show for a chance to win P1 million. They are haunted by a violent black lady (portrayed by Iza Calzado) seeking vengeance for the death of her loved ones.


DJ Mo Twister observed that, "Gabby has a youthful energy na parang hindi siya napapagod or anything. Of all of us, siya ang may pinakamalaking role at ang dami pa niyang ibang tapings but when he gets to the shoot, he's so energetic. He's very hyper and he always has a youthful energy. He's a good actor, a good person and a nice all around good guy. It's an honor to work with him."


Since this is DJ Mo's first time to appear in a movie, did he have a hard time adjusting because he is used to hosting TV and radio shows? The Showbiz Central host quipped, "I was really scared. Actually, ang horror part ng movie na ito ang acting ko. Biro lang! Ang [inisip ko], will I be able to do it? Luckily, si Topel Lee, I've worked with him before and I remember asking Topel what movies to watch para may peg and may suggestions naman siya.


"Nung first day, my first scene in 12 years was a very heavy scene and it's probably the heaviest scene that I would have in the entire movie and Topel said that in one take, it was good enough. That built my confidence kasi akala ko 20 or 25 takes ako. That gave me a lot of confidence for the rest of the movie."


Members of the press curiously asked Mo about his working experience with Maricar Reyes.


"May isang eksena kami ni Maricar and medyo nag-worry ako kasi you want to know what the response would be, what the reaction would be when you first meet her. I just want to say what a wonderful, wonderful person she is kasi nung nakilala ko siya, nilapitan ko siya. I said, 'Hi Maricar, my name is Mo, it's nice to meet you.'


"Sabi niya, 'It's nice to meet you, I'm glad to work with you.' Very nice, very cordial, super bait and very classy. It helped me that I'm not guilty by association kasi friends ko si Hayden [Kho Jr] and Vicki [Belo]."

To date, Hayden is still facing charges for allegedly violating Republic Act 9262 or the Anti-Violence Against Women and Children Act.

White House will be screened in movie houses starting October 20. The cast members will have a mall show on October 16 at SM Sucat.

SYNOPSIS. Filmed in the actual haunted mansion along Leonard Wood Road in Baguio City, White House focuses on six contestants who join a Pinoy horror reality show. A million pesos will be given to the contestant able to survive for five days of dealing with a strange occurrences inside the creepy White House in Baguio City. However, as the night draws to a close, and the body count rises, the contestants realize their lives are also on the line.


Mo plays a cocky radio DJ who doesn't believe in ghosts but enters the competition for the money. Joem, meanwhile, is a male beauty pageant veteran who joins the reality show for fame.


The other contestants are composed of Lovi Poe as a prostitute and Megan Young as the broken hearted wannabe writer. Jairus Aquino and StarStruck V alumna Sarah Lahabti play the siblings from the province who want to escape their abusive father.


Gabby Concepcion leads the cast of this movie as the psychic who communicates with ghosts. Maricar Reyes is the scheming reality TV show producer who has Janus del Prado as her production assistant.