Penn Badgley and Emma Stone score an Easy A 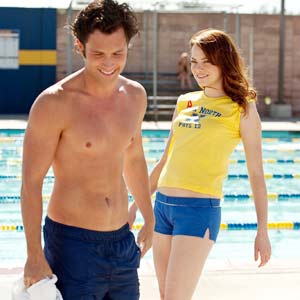 Penn Badgley (left) says of his character, Woodchuck Chuck, in Easy A, "If everyone else thinks he looks like an idiot for doing what he does, it doesn't matter." Emma Stone topbills this comedy film now being screened in Philippine cinemas.

Best known for his role of Dan Humphrey in the hit series Gossip Girl, Penn Badgley was more than happy to take on a new challenge with his role in Columbia Pictures' new comedy titled Easy A.

Playing the part of "Woodchuck Todd" was so tempting, he arranged to fly between the west and east coasts of the U.S. to accommodate the shooting schedules for both the film and his series.


In Easy A, clean-cut high schooler Olive (Emma Stone) finds that her newfound bad-girl rap—courtesy of a little white lie about losing her virginity—has an upside: she is finally getting noticed. Olive decides to exploit her "easy" reputation and use the school rumor mill to advance her social and financial standing. But life starts to spin hilariously out of control, and there is only one boy, Todd (Badgley), who sees through her vixen veneer to the heart of it.


"It really does run the gamut," agrees Badgley, "and that's one of the reasons I wanted to play the part. Ideally, for most of the film, you don't really know what my character is doing in the movie, but it all makes perfect sense at the end.

"I had a lot of fun being the strange, irreverent guy who does these seemingly inconsequential things throughout the movie, but what made me really want to play the role, was the substance and importance of the character. It's not necessarily a complicated role, but it's one that could be easily misconstrued and played inappropriately if taken in the wrong direction."


"Yeah, he just does it," agrees Badgley. "But I think it's more than just being an agreeable sort of character. He's like 'I'm a teenager, I'm living in Ojai, I'm just waiting to go to college and for my life to begin.' I think that's the way he feels, and he's having fun while he does it.

" If everyone else thinks he looks like an idiot for doing what he does, it doesn't matter. Even though everything I'm doing as the character is theoretically really dumb and humiliating, hopefully I'm doing it with enough dignity that makes it sort of cool."


Speaking of humiliation, in the pivotal finale scene, Badgley finds himself back in blue paint, and in the woodchuck costume at the same time, and eventually, shirtless.

"It's already sort of a miserable feeling having the body paint on that's clogging your pores and feels claustrophobic, and then to have the woodchuck costume on top of that," says the actor.

"I was shirtless in the scene, so the seams were rubbing against the skin. It was really hot in the costume, and production had to turn the air conditioning off for the scene. There was a lot of sweating, and in each take I'd have to run around, throw things into the crowd, yell and scream, have the costume ripped off, and then pick Emma up and join in the dance. It was a long, arduous process."


Opening across the Philippines today, November 10, Easy A is distributed by Columbia Pictures, local office of Sony Pictures Releasing International.