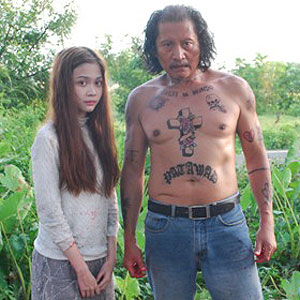 Ria Garcia (left) plays the young girl who seeks the help of an ex-convict named Ishmael (Ronnie Lazaro, right). This action film is one of the seven films competing in the 6th Cinema One Originals Film Festival that's ongoing at the Shangri-La Mall in Mandaluyong City.

Director Richard Somes is no stranger to the Cinema One Originals Film Festival. In 2008, he helmed the horror drama Yanggaw. The film bagged seven awards during the festival's awarding ceremony, including Best Director and Audience Choice.

Yanggaw is about a patriarch (played by Ronnie Lazaro) who discovers that his daughter turns into a blood-thirsty aswang—a vampire-like mythical creature in Philippine folklore—at night. As the villagers become wary of the numerous murders, he is forced to confront the demon that is his daughter.

This year, Somes returns to Cinema One Originals with his highly anticipated second feature Ishmael.

So, if you miss the action of yesteryears, Ishmael is right up your alley.

ISHMAEL'S REVENGE. After being imprisoned for 12 years, Ishmael (Lazaro) decides to go back to his bucolic town. To his surprise, everyone has turned into religious freaks worshipping a powerful cult leader who calls himself Ama (Mark Gil).

Despite several attempts by the townspeople and his old pal Nestor (Pen Medina) to make him join Ama's church, Ishmael constantly declines their invitations.

But when a young, innocent girl named Agnes (Ria Garcia) seeks his help to escape Ama's church and eventually their town, he inadvertently unravels the cult leader's secrets. Ama may seem like the typical religious leader. But something is not right about him, something we can't pinpoint.

Ama's façade slowly crumbles to reveal his true colors. When one of his followers questions his violent nature, she is slapped repeatedly by Ama himself as a form of punishment.

He also orders the townspeople to ward off outsiders by any means, violence included.

Ama's methods are questionable, but what's more intriguing is the fact that Agnes is running away from him. Somes sets a brooding mood all throughout the film as these events unfold in a thrilling, albeit slow manner that will keep you at the edge of your seat. All thanks to a bad-ass score and suggestive cinematography.

With the slow burn that is the first half, you can't help but jerk at the chaos that soon ensues. With a bolo tied to each hand, Ishmael single-handedly battles Ama's band of blind followers, including his blind friend Nestor, in order to help Agnes escape.

It's messy, over-the-top, and brutal. You can't help but root for our macho hero as he hacks everyone to pieces.

Given a bigger budget, the action scenes could have been rendered more fluidly and executed more convincingly.


In Ishmael, there's a possibility that this will happen again. Lazaro plays the title role with gusto. No sense of remorse is seen on his face as he wields his bolo and delivers the entire town to their final destination.

With similar intensity, Mark Gil plays the villain with all its nuances and ironies. He quotes verses from the Bible as quickly as he orders his men to behead those who hinder his plans.


I believe Lazaro and Gil essay their roles convincingly enough to put them alongside the likes of Fernando Poe Jr., Ace Vergel, Bembol Roco, and Tony Ferrer.

Somes is undeniably a skilled director. He brings a rough-edged aesthetic to a story of revenge and redemption. He just might put action films back on the map. With his lust for blood—and cinematic style to boot—Somes can be considered the Quentin Tarantino of Philippine independent cinema.

(CLICK HERE to view the screening schedule of the film fest that will run until November 16, 2010 at the Shangri-La Mall in Mandaluyong City)