Chronicles of Narnia: Voyage of the Dawn Treader will open in Philippine cinemas on December 9 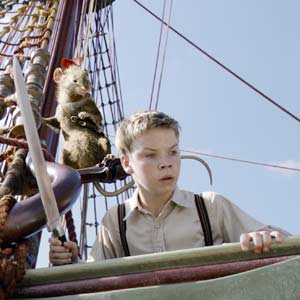 Will Poulter is cast as Eustace Scrubb, the bratty cousin of the Pevensies, in Chronicles of Narnia: Voyage of the Dawn Treader.

Chronicles of Narnia: Voyage of the Dawn Treader introduces a new character in the person of Will Poulter who plays Eustace Scrubb, the bratty cousin of the Pevensies.


Returning in their biggest 3D adventure are Georgie Henley and Skandar Keynes who play Lucy and Edmund Pevensie, respectively. In the film, the Pevensie children are staying at Eustace's home when all three are dragged into Narnia via a painting on the wall depicting the ocean, which suddenly becomes terrifyingly real as gallons of water flood into the room.

They surface in the ocean in Narnia, near Caspian's ship, The Dawn Treader, and embark on an epic quest to find the seven Lost Lords.

The teenage actor relishes the opportunity to work with director Michael Apted and co-stars Ben Barnes, Georgie Henley and Skandar Keynes (who have all appeared in previous installments of Narnia). For him, this particular adventure was a dream come true, especially since it was shot on the shores of Australia.


"I loved being in Australia," he says. "I loved the people I worked with and we got to work in a giant water tank—that was so cool. We also learned to scuba dive and I learned sword fighting, too, which was fantastic.

"Finally, I had to work with a blue screen, which was weird but fun. After work, I would go surfing and I loved doing that. Actually, I can't begin to describe how much fun it was. I had the best time."

Born and raised in London, Will also loves to act and made a very promising start in the professional world of filmmaking at just 14 years old when he starred in the British comedy Son Of Rambow. He credits his drama teacher at school for inspiring him to take the plunge and try out for the role of Lee Carter.


"My teacher, Laura Lawson, put me up for my first audition for Son of Rambow," he says. "I kind of owe everything to her. She's been amazing to me."

When Michael Apted (Amazing Grace, The World Is Not Enough, Nell) first auditioned young Will for the part of Eustace Scrubb, the director was obviously impressed. Typically, though, Will himself was convinced that he didn't stand a chance. "I was absolutely terrified."

"Eustace is really a horrible, horrible guy," Will explains of his role. "He's obnoxious, at times arrogant, and quite defensive of himself, and he's very much against the whole idea of Narnia and talking creatures," he says.

Chronicles of Narnia: Voyage of the Dawn Treader opens December 9 in theaters nationwide from 20th Century Fox and distributed by Warner Bros.