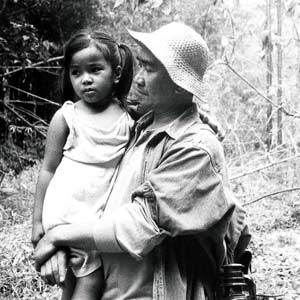 Wag Kang Titingin, a short film about a family traveling in war-torn Mindanao, was screened in Thailand recently during the 8th World Film Festival.

The 8th World Film Festival recently held in Bangkok featured one short film and two full-length movies from the Philippines. From November 5 to 14, 150 entries chosen worldwide were screened at the Paragon Cineplex and Major Cineplex Sukhumvit in Thailand.


Anacbanua (international title: The Child of the Sun) was also included in the Asian Contemporary category of the film fest. Directed by Christopher Gozum, this black-and-white feature is touted to be the first full-length film done in the Pangasinan language. Another Filipino film in the same category was Ato Bautista's drama-mystery titled Di Nagtatapos ang Gabi (international title: The Night Infinite).


Meanwhile, Wag Kang Titingin (international title: Do Not Look) was included in the Southeast Asian Shorts, which featured entries from Indonesia, Laos, Singapore, Thailand, and Vietnam.

Directed by Pam Miras, this short film was part of ANC's Ambisyon lineup, especially produced for the voters' education before the May 2010 national elections. Wag Kang Titingin tells the story of a father and his two young daughters who are traveling through a war-torn area in Mindanao.

It was chosen as the Best Short Feature during the 6th Cinemalaya Philippine Independent Film Festival.

The objective of the World Film Festival, according to its website, is "to introduce quality, non-mainstream films from all over the world. It aims to become a showcase for independent films and new work from rising talents to cinema masters to show the continuity from generation to generation as a vital component in the development of the film industry."

Pam recalls how she was able to join the festival: "The film was created for the Ambisyon 2010 omnibus project. But the filmmakers had complete rights to the material so I decided to enter it in different festivals. My friend, writer/teacher/filmmaker Meyor Sanchez sent out copies of the film collectively with other films from our group Red Room Productions."


Red Room is comprised of batchmates from Ricky Lee's scriptwriting workshop and friends. "They liked it, and they asked for a screening copy when its selection was finalized."

"We shot the film entirely at Wawa Dam," says Pam of the production, which took place in February 2010. "We were working on a tight budget, that's a major difficulty. To get to the set, you had to cross a narrow river or sapa using a balsa. We used no lights and so we had to pack up finished or not before sundown. The short trek back to where we were parked was done in total darkness using lights from our cellphones."

Malay Javier is the film's cinematographer; Karr Cotamora, production manager; Mikey Red and Timmy Harn, production designers; and Sunshine Matutina is the editor. Along with the other Ambisyon short films, Wag Kang Titingin was screened in schools and universities across the country through the Active Vista film festival.

Pam Miras is a graduate of film from the University of the Philippines in Diliman. Her filmography includes Reyna Ng Kadiliman, which won Best Short Film at the 2000 Gawad Urian Awards and won 1st Prize at the Short Feature Category at the Gawad CCP. She also directed the short film Blood Bank, which won Best Philippine Short Film at the 2nd .MOV Digital Film Festival and Best Screenplay (Short Film Category) during the 1st Cinemalaya Philippine Independent Film Festival.