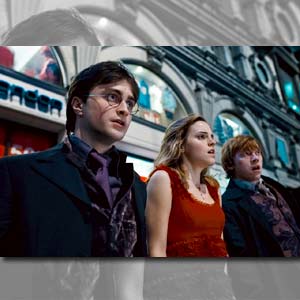 (From left) Daniel Radcliffe, Emma Watson and Rupert Grint reprise their roles as Harry Potter, Hermione Granger and Ron Weasley, respectively. Harry Potter and the Deathly Hallows is the seventh and final adventure in the Harry Potter film series.

"MANILA, November 22 - It's Pottermania all over again in the Philippines as Warner Bros.' Harry Potter and the Deathly Hallows - Part 1 shattered records and created box-office magic!

"The seventh Potter film made history by debuting with a death-defying P102 million nationwide for the November 18-21, 2010 frame, this according to Francis Soliven, general manager of Warner Bros. (F.E.), Inc. which distributed the film.

"Internationally, Hallows - Part 1 soared to the top of the global box office in its opening weekend, earning a staggering $330.1 million dollars worldwide, encompassing $125.1 million in the U.S. and $205 million overseas.

"The North American box office numbers shattered the franchise's previous opening weekend record-held by Harry Potter and the Goblet of Fire at $102.6 million-surpassing it by an astounding 23%.

"Worldwide, the opening weekend for Hallows ranks as one of the highest of all time, which is especially impressive for a non-holiday weekend.

"With the success of its first six of seven titles, the Harry Potter series had already achieved the distinction of being the top-grossing film franchise of all time, reaching a combined worldwide gross of $5.4 billion. The numbers for Deathly Hallows - Part 1, as well as the anticipation for Part 2, opening on July 15, 2011, should ensure its place in film history for years to come.

"In Part 1, Harry, Ron and Hermione set out on their perilous mission to track down and destroy the secret to Voldemort's immortality and destruction--the Horcruxes. On their own, without the guidance of their professors or the protection of Professor Dumbledore, the three friends must now rely on one another more than ever. But there are Dark Forces in their midst that threaten to tear them apart.

"Distributed by Warner Bros. Pictures, Harry Potter and the Deathly Hallows - Part 1 is still showing across the Philippines."