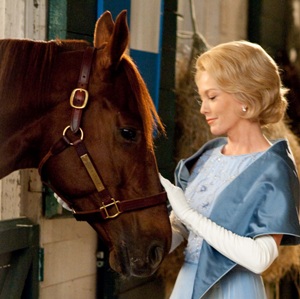 In Secretariat, Diane Lane (in photo) plays housewife and mother, Penny Chenery. She agrees to take over her ailing father's Virginia-based Meadow Stables, despite her lack of horse-racing knowledge.

"In the film, housewife and mother Penny Chenery (Lane) agrees to take over her ailing father's Virginia-based Meadow Stables, despite her lack of horse-racing experience. Against all odds, with the help of veteran trainer Lucien Laurin (Malkovich), she manages to navigate the male-dominated business, ultimately fostering the first Triple Crown winner in 25 years and what may be the greatest racehorse of all time.

"The story is about heart--Secretariat's and the heart of the woman who owned him. Both were greater than anyone imagined," says director Randall Wallace, who is the Oscar®- and Golden Globe®-nominated screenwriter of the global hit Braveheart. "I believe that when Secretariat was running the last of his races, he was no longer running against other horses; he was running for the joy in becoming who he was meant to be."

"Filmmakers tried not to veer from the facts of the story, but Wallace makes clear that he didn't want to make a documentary account of Chenery's life. "I have worked on many historical subjects as a filmmaker and I have a saying: Let's not let the facts get in the way of the truth. The way I see that is, in making a movie, you are making an impressionistic painting. You are choosing which facts to highlight and which facts to omit. Inevitably, by making that choice, you are writing a story from the stark facts of journalism to the vivid majesty of myth. So in this story, what people are going to feel is the deeper truth of what Secretariat and Penny accomplished."

"Secretariat brings that spirit to the big screen, showcasing the power of the human (and animal) spirit. But according to Wallace, Secretariat has an even greater significance. "I think this movie is about transcendence, about people and animals achieving more than anyone thought possible," he says. "It has an inspiring theme and story--it's the powerful story of a horse and a woman who did what no one believed could be done. And it reminds us of the miracle of life, how life is bigger than we believe it can be."