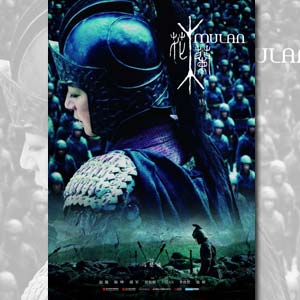 Mulan stars Zhao Wei (of So Close fame) and Chen Kun. It is the story of Hua Mulan, a woman who went to battle as a replacement for her ailing father. Her true identity concealed, she proves herself a great warrior and an outstanding leader, and is loved and respected by her men.

Popularized by the Disney animated film of the same title, Mulan tells the story of a girl who took the place of her ailing father in the army. It traces its roots from a Chinese poem written during the Northern Wei dynasty (386-534). During this era, Northern China was ruled by nomadic invaders.

It follows the story of Hua Mulan and chronicles the war between the Rourans and the Weis which lasted for 12 years. Mulan rises in the military leadership while concealing her real gender. A bond develops between her and her greatest ally Wentai, who turns out to be the prince of Northern Wei.

Mulan is one of the films featured in this year's Chinese Spring Film Festival which will run from January 27 to February 1 at the Shangri-La Plaza Premiere Theatre.

The festival, which is on its fifth year, aims to promote Chinese language and culture in mainstream Philippine society.

"China will be the future and will help Filipinos to become competitive globally," says Dr. Rosita Leong, a proponent of the festival.

Aside from Mulan, three other films will be screened: Queen of Cooking, Forever Enthralled, and The Grand River.

Queen of Cooking is about a woman who dreams of becoming a chef. After a failed romance, she vows to devote all her efforts to cooking. Her ultimate goal: To win the "Master of the Kitchen" contest and claim the title "Queen of Cooking." The movie features the unique style of preparing authentic Chinese food.

Forever Enthralled follows the turbulent life of Mei Lanfang, a legendary innovator in Beijing opera. It chronicles Mei's rise to fame in China and success around the world. It touches on the story of Mei's famous rivalry with performer Swallow 13 and her tragic romance with onstage partner and married man Meng Xiaodong.

The Grand River showcases the Chinese government's efforts to assist the Xinjiang people's efforts to develop their territory and honor traditions. During the early years of Communist China, idealistic young men struggled to develop China's northwest, particularly the Tarim River area, which needed technology to conserve water and prevent disasters. In this backdrop, romance blossoms and endures well into the '90s.

Tickets to the films are priced at P100 (minimum). Following is the screening schedule: