Michael Bay talks about Transformers: Dark of the Moon 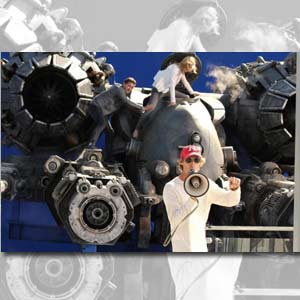 Shia LaBeouf, Rosie Huntington-Whiteley and Michael Bay (wearing red cap) on the set of Transformers: Dark of the Moon.

"Michael Bay is among the most driven filmmakers in all of Hollywood, and right now his biggest motivation is making people forget his last movie, Transformers: Revenge of the Fallen.

"It was kind of a mess, wasn't it?" an unsmiling Bay said of the 2009 film, which was far from a flop--it grossed a potent $836 million worldwide, finishing third for the year behind only Avatar and the sixth Harry Potter movie. But the director still talks about the blockbuster in tones of regret. "Look, the movie had some good things in it and it was entertaining and it did very well, but it also failed in some key ways. I learned from it. And now with this third movie we're going back to basics and I absolutely believe this is going to be a much better film than the second one."

"As Bay spoke, he was standing on the Playa Vista set of Transformers: Dark of the Moon, his ninth feature film as director and, to his own surprise, his third movie about Bumblebee, Megatron and the other giant, shape-shifting alien robots called Transformers. It's due out July 1. The 45-year-old director was skeptical when executive producer Steven Spielberg approached him back in July 2005 with the concept of making a Hollywood franchise out of a Reagan era toy line. "The term I used at the time was 'stupid idea,' if I remember right," Bay said. But after visiting Hasbro and learning about the characters and cosmic mythology that had been created around them, Bay began to warm up to the idea.

"Now, the franchise is the centerpiece of Bay's 15-year filmmaking career. Though he has no expectation that he will make a fourth Transformers film--or maybe because of that--he is fiercely focused on leaving the franchise on a high note. He has also been reaching out to journalists in recent weeks to show them footage and perhaps, through his candor and enthusiasm, win a reprieve in the court of public opinion.

"I'm still having fun and especially with this movie," Bay said. "Look, we got burned on the last movie. The big thing was the writers strike, it hurt the film and it made it hard on everybody. We had three weeks to get our story and, really, we were going into the movie without a script. It's tough to do that. It was too big of a movie. There were too many endings or too many things that felt like endings. There was so much animation [in the visual effects postproduction work], too, and we ran out of time. We used the schedule of the first movie for the second movie but on the second one way more labor was needed for the animation. And then it felt like we were writing the script in the edit room, trying to put together a story."

"The 2009 film was memorably savaged by leading critics (Roger Ebert attacked it as "a horrible experience of unbearable length," Joe Morgenstern of the Wall Street Journal called it "a pile of glittering junk" and Rolling Stone magazine's Peter Travers groaned that it was "galactically stupid ... beyond bad, it carves out its own category of godawfulness"). In private, many of Bay's industry peers held the film up as the Optimus Prime example of what happens when story and character are made subordinate to CG spectacle and an especially pandering brand of one-liner humor.

"I think we have something to prove with this third one," Bay said of the movie that brings back star Shia LaBeouf in the role of Sam Witwicky, the young everyman who befriends an Autobot called Bumblebee. "We're back to basics. The second one was something going on inside of Sam, the way he's affected and feeling, and that's a hard thing to do. It's more mystical, in a way. This one, there's nothing mystical about it. It's a good old-fashioned mystery and it's a tougher movie ... it's funny but it's not a wisecrack-funny; it's funnier in the situation."

"Some critics have taken Bay to task for making chrome-plated movies that have hollow hearts, but Spielberg says he brought the filmmaker in for Transformers because of the way he works with humans, not machines.

"The first chance I ever had to work with Michael Bay was when he directed The Island for DreamWorks and Warner Bros. in 2005," Spielberg said. "The Island, while not a commercial success, was successful in showing me how well Michael could deal with relationships within a big conceptual drama. It didn't take second sight to know how brilliantly he would handle the action between the Autobots and the Decepticons. But because our principal premise for a first 'Transformers' was the story of a girl, a boy and his car, 'The Island' showed me that Michael would pay special attention to the human stories in Transformers."

"Spielberg added: "As the plot thickens in the third installment of Transformers, Michael's work on it feels fresh and energized ... with lots of new and inventive ways of turning a page on this franchise. "

Instead of giant military operations and armada imagery, this third Transformers film is "lean and mean," Bay says, and the script by Ehren Kruger ("The Ring") presents more of a small-team, commando tension. Bay says he thinks of this film as a sort of homeland version of "Black Hawk Down" - but, you know, with giant alien robots. Instead of Middle East deserts, the majority of the action will be set amid the smoldering boulevards of Chicago where humanity continues to fight against the hulking mecha-warriors from outer space, exploiting their one known weakness (their eyes).

"Bay is especially proud of some of the urban warfare scenes (including sequences featuring a team of glide-suit commandos who dip between skyscrapers like a black-ops version of flying squirrels) and the conspiracy mystery that sets up the new story, which traces back to the 1960s space program (a digital ghost of John F. Kennedy and the archive-reel visage of Walter Cronkite will play parts in Bay's new lunar adventure).

"Transformers: Dark of the Moon brings back John Turturro as the scenery-chewing federal agent Seymour Simmons and familiar faces in Josh Duhamel and Tyrese Gibson. Joining the cast this time around are John Malkovich, Frances McDormand and Patrick Dempsey, but the big news is the prominently absent name on the call sheet. Megan Fox, the female face of the franchise (unless you count the robots), has been left behind, either by her choice or by Bay's command--it depends on whom you ask or choose to believe.

"Fox played Mikaela Banes, Sam's girlfriend, and Bay says the movie has more room to move without the character and that the cast is stronger this time around. When the topic of Fox comes up, Bay's expression turns to something between apathy and seasickness.

"I don't want to talk about it, but we obviously replaced our girl, and by everything I see we fared well," Bay said, nodding over his shoulder toward Rosie Huntington-Whiteley, a Victoria's Secret model from England who has zero acting experience--which is even less than Fox had when she made her feature-film debut in Bay's Bad Boys 2 as an uncredited bikini-clad actress. Over the course of four hours spread across two interviews both on and off the set, Bay never uttered Fox's name or spoke to the rumors that on the set of the second Transformers movie she was high-maintenance and/or he was tyrant. "Look, I will say that I think we have a better cast with this third movie than we've ever had."

"Bay is far more interested in discussing his use of 3-D cameras on the set of Dark of the Moon. On another afternoon, at his Santa Monica offices, he spoke about the stereoscopic format with the conviction of a convert . "I visited Jim [Cameron's set] on Avatar and I just saw all the blue screen and the big cameras and I'm like, 'This is so not me.' So it's kind of scary, all right? Especially because I do real-world stuff ... this is really hard for me because I'm a die-hard film guy, anamorphic old-school lenses, and there's nothing more beautiful than anamorphic lenses to me. So going digital was just kind of crass for me."

"But Bay lives for technology, gear and gizmos (there is a reason he's making movies about robots that turn into race cars and fighter planes) and he is now on a passionate quest to make a statement in stereoscopic cinema. The 3-D film (and its pricier theater tickets) are all the rage in Hollywood, of course, but most of the movies are filmed in conventional fashion and then converted to the extra-depth format during postproduction. Shooting with actual 3-D cameras is less popular; the equipment is bulky and requires the sort of care and calibration that can be frustrating on movie sets that involve big explosions and even bigger budgets.

"Have you ever seen these cameras? They're big. You've got the mirrors--what you're doing is splitting a mirror, so you get weird refractions. It cuts light. The second camera is always going to be a touch softer because it's going through a mirror. It sees reflections a little weird. It'll catch a glare on one eye but it won't on the other so it will kind of jump out at you sometimes in 3-D."

"Bay is wildly excited about the 3-D achievements he's seeing already in postproduction but overall it's early days for the moviemaking approach and Bay has the impatient air of a man who wants the equipment to catch up to what he sees in his mind's eye. He puts up with it though, because, again, he is a man with something to prove.

"In an unusual move, the filmmaker recently invited a small group of online journalists to a screening room to show them a 3-D teaser trailer for Transformers: Dark of the Moon. The goal was to refute Internet rumors that the movie's 3-D footage was underwhelming and, by the reactions in the room, the director succeeded in a big way. Instead of stopping there, though, Bay brought the startled correspondents into a cramped editing suite to show them raw chunks of the movie, far more than they expected or studios executives would like. Afterward, Bay didn't mince words about his motivation. "I'm trying," he said, "to make up for movie two."