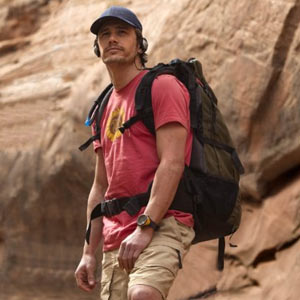 In preparation for his role as a trapped mountaineer, James Franco trained in a climbing gym.

"Phenomenally known as nemesis Harry Osborne in the Spiderman trilogy series, James Franco gives us his latest blood-rushing performance as he battles for survival in 127 Hours, Danny Boyle's groundbreaking yet awe-inspiring film on the life of trekker Aron Ralston when he was trapped in the burrows of Utah canyons.

"In line for this year's Oscars with prime nominations such as Best Picture and Best Actor, 127 Hours is the true story of mountain climber Aron Ralston's (James Franco) remarkable adventure to save himself after a falling boulder crashes his arm and traps him in an isolated slot canyon in Utah.

"Trapped for days in the remotest and hardest terrains in the canyon, Aron's hope for rescue starts to diminish as his packed resources slowly depletes. Hope against desperation got the better of Aron during his ordeal resulting in the most hair-raising ways to survive and stay sane: drinking one's urine, last-moment recording and ultimately cutting his arm off to be finally set free from the boulder that trapped him.

"From the beginning, Danny Boyle knew he was going to require something quite extraordinary from his lead actor, not just in his performance but also someone who could possess the physical capabilities demanded by the role of Aron.

"Not only would that actor have to be able to handle being in nearly every frame of the film and have to work in physically suffocating quarters, under mentally unhinging circumstances, he would also have to let the camera get deep inside to the most primal of emotions.

"Stripped of everything, even the ability to move, Aron was left with a raw view of who he was and who he hoped to become.

"The extraordinary acting skills and in-depth inhabitation of the role seemed to combine perfectly in James Franco. Franco's diverse roles in hit movies including Pineapple Express, Milk, Date Night and Eat, Pray, Love have etched him as his generation's most original talents. An adventurous renaissance man of his own accord, Franco is also currently pursuing his Ph.D. program in English at Yale.

"Ralston was himself excited by the choice. 'I was very happy to know that someone with those kind of dramatic chops was going to do this. I knew from seeing James in other films that he really likes to inhabit the people he plays,' he says.

"'I was psyched to meet him. We listened together to the video I made that was my Last Will and Testament, which I thought was going to be the way I said goodbye to my friends and family. I also kind of re-enacted things for James, like some of the body positions I used while standing for so long and even demonstrating exactly how I held the knife when I was cutting into my arm.'

"Franco felt strongly drawn to the role from the minute he heard about the project—and it turned out to be like nothing he'd done before. 'One of the reasons I wanted to do this role is because it is made up of so many little personal moments, those moments we all have when you're completely alone,' he says.

"'I felt like that was a side of me I could really understand and tap into. The story is basically about a man confronted with his own death and figuring how to get back to life—it's a human situation I don't think has been explored very much in films before.'

"'I also thought it was a tremendous opportunity to tell a story through minute physical actions and these kinds of private soliloquies Aron has when he talks to his video camera. It was very different from most roles.'

"To dive even further into the role, Franco worked out in a climbing gym and slimmed down to Ralston's sleek, outdoorsy physique. He read books about climbers and adventurers—and he also looked inside himself to really ask if he could actually do what Aron did to survive.

"'I thought about how drastic his circumstances were—that it was life and death,' Franco says. 'I'm pretty squeamish about blood, even in the doctor's office, but you know, in that situation I'd get over it. I'd like to think that I'd try something and that I couldn't just sit there.'

"The filmmakers watched as Franco dove deeper and deeper into this personal abyss, then came out the other side. 'I think James does work in this film of equal importance to what Danny has done. It's a kind of duet,' comments Christian Colson. 'Franco fully inhabited the character and it's a very unique and amazing performance.'