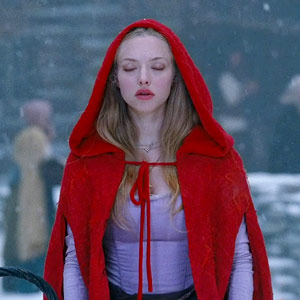 "We are throwing all the sex and danger back in," says Amanda Seyfried about her portrayal in the fairy tale-turned-movie Little Red Riding Hood.

"In Red Riding Hood, Seyfried plays Valerie, a beautiful young woman torn between two men. She is in love with a brooding outsider, Peter (Fernandez), but her parents have arranged for her to marry the wealthy Henry (Irons). Unwilling to lose each other, Valerie and Peter are planning to run away together when they learn that Valerie's older sister has been killed by the werewolf that prowls the dark forest surrounding their village.

"For years, the people have maintained an uneasy truce with the beast, offering the creature a monthly animal sacrifice. But under a blood red moon, the wolf has upped the stakes by taking a human life. Hungry for revenge, the people call on famed werewolf hunter, Father Solomon (Oldman), to help them kill the wolf. But Solomon's arrival brings unintended consequences as he warns that the wolf, who takes human form by day, could be any one of them.

"When fairytales were first written, they were so much darker," says Amanda Seyfried whose first exposure to such tales was as a child listening to recordings on her tape deck. "Over time, they became more prudish in a way, taking the danger and sexuality out of the stories."

"But as exemplified by her Valerie, a lusty medieval lass caught in a love triangle between her wealthy intended and a bad-boy woodsman as well as sharing a strange bond with a werewolf that is terrorizing her village, Seyfried promises, "We are throwing all the sex and danger back in."

"However, this beauty is no naive babe in the woods. Says director Catherine Hardwicke, "Valerie is pretty tough and brave, although not a super heroine. The novel based on the movie just came out with the tagline: 'Good girls don't talk to werewolves.' She is not just a goodie girl. That is true to the early stories of Red Riding Hood. Her mother tells her not to dilly-dally on her way to Grandmother's. She instead picks flowers to get in touch with her sensuality and tells the wolf where she is going."

"In other words, she says with a laugh, "she is a bit of a naughty girl."

"Many have commented on the similarity to Twilight, not surprising since Hardwicke steered that franchise's 2008 original. But the director notes there is a major difference with her gothic horror fantasy: It is also a suspense thriller, since the human identity of the murderous beast remains secret until the end.

"As Hardwicke concludes, "Solving the mystery is a huge driving force of the movie."