Adam Sandler gets his own star at Hollywood Walk of Fame 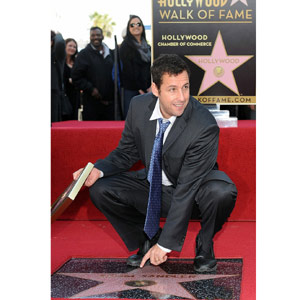 
"Adam Sandler has unveiled his own star on the Hollywood Walk of Fame.

"The 44-year-old actor took his wife Jackie Titone and their two daughters Sadie, 4, and Sunny, 2, along to the unveiling on Hollywood Boulevard, and the proud star admitted he still feels very lucky to even get to work on films.

"The 50 First Dates star said: "I work hard as a comedian, then I got on TV, then I got on the movies. So many people come out here with the same dreams I have and I'm getting to do that. I really appreciate it."

"Both his daughters praised their father—who stars in upcoming romantic comedy Just Go With It with Jennifer Aniston—saying into the microphone: "I love my daddy."

"And Adam's family looked on proudly as he unveiled the 2,431st star on the Walk of Fame.

"Sandler stars in Columbia Pictures' new romantic comedy Just Go With It as a plastic surgeon romancing a much younger schoolteacher. He enlists his loyal assistant (played by Aniston) to pretend to be his soon to be ex-wife, in order to cover up a careless lie. When more lies backfire, the assistant's kids become involved, and everyone heads off for a weekend in Hawaii that will change all their lives.

"Sandler has enjoyed phenomenal success as an actor, writer, producer and musician. His films have grossed over $3 billion worldwide. His most recent film, Grown Ups, is the highest-grossing of his career, taking in more than $271 million worldwide. Sandler also recently starred in Funny People, written and directed by Judd Apatow starring with Seth Rogen, Leslie Mann and Eric Bana, as well as the box office smashes Bedtime Stories, You Don't Mess with the Zohan and I Now Pronounce You Chuck & Larry.

"Later this year, Sandler will lend his voice for the Columbia Pictures' comedy Zookeeper alongside Kevin James, Sylvester Stallone and Rosario Dawson, and will star in both title roles in Jack and Jill, also for Columbia.

"Previously, Sandler has been seen in the box-office hits Click, starring with Kate Beckinsale, and "The Longest Yard," starring with Chris Rock and Burt Reynolds. He also starred in James L. Brooks' Spanglish, opposite Tea Leoni; the romantic comedy 50 First Dates, with Drew Barrymore; Anger Management, with Jack Nicholson; and Paul Thomas Anderson's Punch-Drunk Love, for which he received a Golden Globe nomination for Best Actor.

"Opening across the Philippines on February 16, Just Go With It is distributed by Columbia Pictures, local office of Sony Pictures Releasing International.