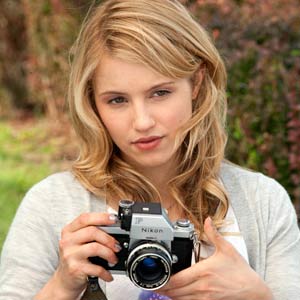 Dianna Agron, who became known for her cheerleader character Quinn in Glee, will topbill the sci-fi film I Am Number Four.


"Dianna Agron breaks from the Glee pack as she stars in one of the year's eagerly anticipated films: DreamWorks Pictures' sci-fi action-adventure I Am Number Four.

"Based on the best-selling book by Pittacus Lore, I Am Number Four revolves about an extraordinary young man, John Smith (Alex Pettyfer), who is a fugitive on the run from ruthless enemies sent to destroy him. Changing his identity, moving from town to town with his guardian Henri (Timothy Olyphant), John is always the new kid with no ties to his past. In the small Ohio town he now calls home, John encounters unexpected, life-changing events--his first love (Dianna Agron), powerful new abilities and a connection to the others who share his incredible destiny.

"Director D.J. Caruso chose actress Dianna Agron to play the pivotal role of Sarah. However, he didn't discover her by watching her Emmy® Award-winning television series, Glee. "I don't watch a lot of television," Caruso says. "She came in to read very late in the process and she knocked me out. She's so dynamic, intelligent and beautiful. I thought she would be a great contrast to Alex with their very different personalities and the dynamic they have between them."

"Agron was immediately taken with the script. "What I loved about it was that the kids are quite mature and wise beyond their years," she explains. "They might not be quote-unquote 'cool kids' or be the ones that pursue typical teenage activities, but they have a lot of heart and spirit, and they go on an awesome journey together.

"I also loved the character of Sarah," Agron continues. "There are a lot of similarities to how I was in school. I love photography and I really started getting into it during high school, taking photos for the yearbook."

"In the film, Sarah is immediately attracted to John. "John is quite unusual and they have a very intense connection right from the start," Agron explains. "It gets deeper throughout the story. Their relationship is very romantic. It's that young love that isn't tainted by any sort of fear--when you haven't had your heart broken five hundred times."

"Agron is best known for her character Quinn on the hit Fox television series Glee, which recently received a Golden Globe® Award and an Emmy®. After a successful launch of the first season, Glee aired for the second season in April 2010.

"She was most recently seen in Burlesque starring Christina Aguilera and The Romantics alongside Katie Holmes, Anna Paquin, and Josh Duhamel.

"Past television credits include Numb3rs, Shark, Close to Home and CSI: NY. She also had a recurring role on the critically acclaimed series Veronica Mars, acted as Debbie Marshall on the sci-fi hit Heroes and appeared in It's a Mall World, a series of short films directed by Milo Ventimiglia.

"Opening soon across the Philippines, I Am Number Four is distributed by Walt Disney Studios Motion Pictures International through Columbia Pictures."