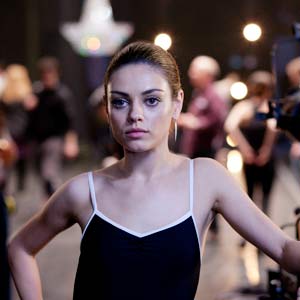 Mila Kunis portrays an unihibited bakllerina in psychosexual thriller Black Swan. She has a daring sex scene with Natalie Portman in this movie, which will open in Philippine cinemas by February 23.


"Natalie Portman as Nina may have much more screen time in the psychosexual thriller Black Swan, but her lingering thoughts on Lily made Mila Kunis an almost equal lead in the film.

"Ukraine-born Mila Kunis came to the U.S. with her family nearing the end of their country's communist era. With no idea of a single English word, Mila at seven and at a time when she didn't have any access to English education surrounded herself with the language and eventually caught on. Her father then enrolled her in acting classes when she was nine and eventually started acting professionally three years later as Angelina Jolie's younger version of addicted model in Gia.


"Mila's string of earlier works included a regular role in the television series That '70s Show and a role in American Psycho II: All American Girl. What followed was a string of films that steadily helped her be recognized as one of Hollywood's hottest yet promising actresses of her generation: Forgetting Sarah Marshall, Date Night, Max Payne and The Book of Eli. An actress who is not hard pressed on proving herself, her latest work in Black Swan is a testament that Kunis isn't just skin-deep hot, but flaming with talent.

"Mila Kunis' Lily perfectly personifies the Black Swan in their company's ballet production of 'Swan Lake," while the already chosen lead Nina, played by Natalie Portman perfectly personifies the White Swan. As the two young dancers expand their rivalry into a twisted friendship, Nina begins to get more in touch with her dark side, keeping an eye on Lily with a recklessness that threatens to destroy her.

"Mila plays Lily as someone who has exactly what Nina wants. She is much freer, more alive and more sexual than Nina," says director Aronofsky. "Lily has the freedom to express herself that becomes the source of both great allure and intense friction for Nina."

"Kunis was instantly drawn to her wildly uninhibited character and to the intriguing idea of playing a dancer though brutal reality knocked her for a serious loop. "I had this idea in the beginning of grandeur, of feeling graceful and wearing a tutu, but you have no idea how physically demanding it is until you do it," Kunis says. "It really takes a toll on your body!"

"Nevertheless, she threw herself into training and into exploring the upending effects Lily has on Nina. "The key to Lily is that she had to be exactly the opposite of Nina, her mirror opposite, in every way," says Kunis. "Even their dance styles are opposite. Nina is a very technical, beautiful dancer while Lily is more raw, free and spontaneous. Nina's whole life is ballet but Lily eats hamburgers, parties, has sex, does drugs and explores everything. She's the complete antithesis of Nina and embodies the Black Swan."

"Taking on Lily as both the ultimate impulsive woman and an apparition was a tightrope act, one Kunis says she could not have done without Darren Aronofsky providing a safety net. "I wouldn't have done this movie if not for Darren," she confesses. "This character could be very iffy in the wrong hands. There isn't a right way to play Lily. I didn't read the script saying, Oh, I've got this character figured out; I know exactly how to play her, because in every scene she's different. But I trusted that in Darren's hands it would work. I don't know if I would've felt like that in the hands of any other director."