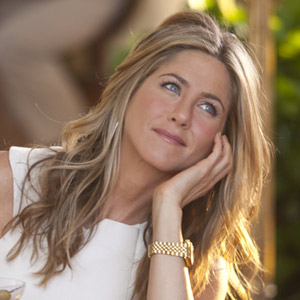 "In the film, Danny (Sandler) a plastic surgeon, romancing a much younger schoolteacher named Palmer (Brooklyn Decker), enlists his loyal assistant Katherine (Aniston) to pretend to be his soon to be ex-wife, in order to cover up a careless lie. When more lies backfire, the assistant's kids become involved, and everyone heads off for a weekend in Hawaii that will change all their lives.

"How does a single mom like Katherine, trying to get by and provide for her two kids, get roped into Danny's outrageous scheme? 'She's just exhausted by him,' says Aniston. 'She feels she has to help him save himself from his own web of lies, even though she doesn't approve. When she's in the middle of it, you can see her thinking, "How did I get on board with this?"

"But she does help, because Danny and Katherine have a unique relationship. They work together and have a great relationship—she thinks he's funny and he obviously cares about her, and even though he lies to everybody else, he always tells her the truth.

"'She's the only one who knows what he's really like,' says Aniston. 'She can't help but like him, even when she thinks he's been acting like a pig. When he convinces Katherine that he is done playing the field and ready to settle down with Palmer, she does what any friend would do and helps.'

"But that's just the start--as Danny and Katherine attempt to keep up the charade, the lie keeps getting bigger and bigger. 'Every lie has a domino effect,' says director Dennis Dugan.

"Before Katherine knows it, her kids, Maggie and Michael, have been looped into the lie, but they'll need a little more convincing... especially when Michael sees a way to turn the tables on Danny. Before he knows it, Danny is on his way to Hawaii with a fake wife, fake kids, his real cousin (who's playing the fake wife's fake boyfriend)—all in an effort to convince Palmer that he's a stand-up guy.

"'I couldn't believe how quick and funny Jennifer is,' Sandler says of his co-star. 'I know she is funny in real life, but it was pretty amazing when we were together how much fun we had and how she added and ended up beating me in scenes. I'd walk back to the trailer saying, 'I gotta get some writers to help me.'

"Aniston said their onscreen movie banter was a blast. 'loved it! It was so much fun... We had, as we call it, a nice verbal tennis match.'

"Now showing across the Philippines, Just Go With It is distributed by Columbia Pictures, local office of Sony Pictures Releasing International."