Leighton Meester of Gossip Girl fame will topbill The Roommate 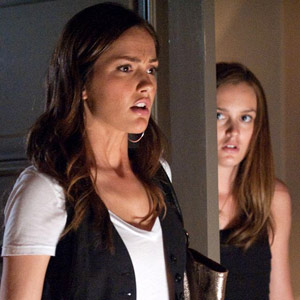 The Roommate is a psychological thriller about college students who have to deal with friendship and obsession.

"Academy Award®-nominated director Christian E. Christiansen (Råzone) crafts a finely tuned tale of madness and role reversal packed with ingenious twists and heart-stopping surprises as a naïve college freshman begins to suspect that her roommate is not what she appears to be.

"In the film, Sara (Kelly), a talented young design student from Iowa, arrives in Los Angeles eager to start college and get to know the big city. Pretty, vivacious and naturally curious, Sara charms her new dorm mates, especially her assigned roommate Rebecca (Meester). A wealthy girl from Pasadena, Rebecca immediately takes Sara under her wing, showing her the cultural highlights of the city and sharing an overstuffed closet of designer clothes with her.

"But when Sara makes more friends on campus, including fun-loving party girl Tracy (Aly Michalka), Rebecca isolates herself and grows oddly resentful of her roommate's social life. As Sara's romance with new boyfriend Stephen (Gigandet) unfolds and her mentor, successful designer Irene (Danneel Harris), comes to town, she has less and less time to spend with Rebecca, who becomes even more determined to have Sara all to herself.

"Rebecca's erratic behavior becomes even more alarming as Sara begins to suspect that Rebecca is sabotaging her other relationships. When Sara reluctantly agrees to have Thanksgiving dinner at Rebecca's parents' palatial home, she discovers a secret that convinces her to abandon her dorm room and move in with Stephen.

"But as Sara tries to distance herself from her increasingly obsessed former roommate, Rebecca spins violently out of control, making an explosive final confrontation between the two inevitable.

"Opening soon across the Philippines, The Roommate is distributed by Columbia Pictures, local office of Sony Pictures Releasing International."