Reese Witherspoon gets her own star in Hollywood Walk of Fame 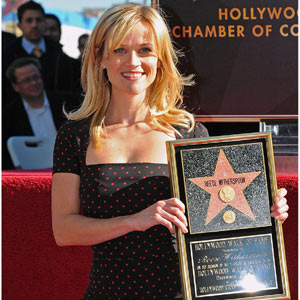 In How Do You Know, Reese Witherspoon portrays a softball player whose relationship with Manny (Owen Wilson) is on the rocks. During this time, she meets George (Paul Rudd), a corporate executive whose own life is on a downward spiral.


"Reese Witherspoon joined the elite group of entertainers with a Star on the Hollywood Walk of Fame recently, and the Oscar winner revealed, "Never in 462 million years did I think this was going to happen to me. I thought I was going to live in Tennessee and be a doctor."

"Reese, who has a new comedy called How Do You Know with Owen Wilson, Paul Rudd and Jack Nicholson acknowleged her good fortune and luck "to have been embraced by the community of Hollywood.

"I'm just so lucky that I get the opportunity to do what I love every day," she said. "It's so nice to go to the movie theater and just escape for two hours and dream, and hopefully my films do that for people."

"The actress was accompanied by her two children, daughter Ava, 11, and seven-year-old son Deacon, for the induction ceremony which was held outside the W Hotel in Los Angeles. Reese looked stunning in a black and red polka dot dress as she was presented with her tribute - the 2,425th star dedication on the famous avenue.

"Her boyfriend, Hollywood agent Jim Toth, was also there to see his girlfriend–who has appeared in a host of hit films, including Cruel Intentions, Sweet Home Alabama and Legally Blond–receive the accolade.

"The 34-year-old actress, who divorced actor Ryan Philippe in 2007 and split from Jake Gyllenhaal in 2009, has admitted she is very "comfortable" in her relationship with Jim and says they are benefits to date someone who isn't famous.

"In the January 2011 issue of America's Glamour magazine, she said, "I have a little perspective on this. I wouldn't say it's easier. Every relationship has its own dynamic. And I don't want to disparage any of the other relationships that I've had that were meaningful and wonderful. But what I'm finding out is that it's very comfortable to be with somebody who understands my career, but doesn't do what I do. He's a great guy. He's wonderful."

"Witherspoon is one of Hollywood's most sought after and respected actresses. She grew up in Tennessee, and returned to her roots to play June Carter Cash in the musical biopic, Walk the Line. Her performance earned her the 2005 Academy Award® for Best Actress, the BAFTA, the Golden Globe, the Screen Actors Guild Award, the New York Film Critics Award, and many other honors.

"She most recently starred as the giant Susan in the DreamWorks Animation film Monsters vs. Aliens. In 2008, Witherspoon starred alongside Vince Vaughn in Four Christmases, which she also produced.

"Opening across the Philippines on March 9, How Do You Know is distributed by Columbia Pictures, local office of Sony Pictures Releasing International."