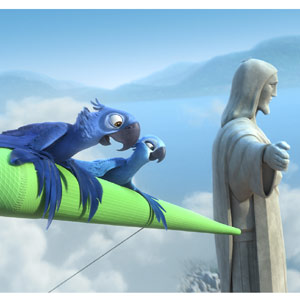 The lead characters of Rio, Blu and Jewel, are voiced by Jesse Eisenberg and Anne Hathaway. Blu attempts to rediscover his roots while finding a common ground with Jewel, who is his complete opposite.

"Recent Best Actor Oscar nominee for The Social Network, Jesse Eisenberg voices lead character Blu in Rio, a 3D comedy adventure about taking a walk on the wild side.

"From Blue Sky Studios who gave the world the Ice Age hit series, Rio nests on a domesticated rare macaw named Blu (Eisenberg) who has never learned to fly and enjoys a comfy life with his owner and best friend Linda (voiced by Leslie Mann). Blu's journey begins in the not-so-domesticated Brazilian jungle, where as a nestling, he's experiencing the joyous musical melodies of hundreds of birds flying and swooping around him. The sounds inspire the baby Blu to initiate his first attempt at flight, which is abruptly cut short when he and several other birds are captured by smugglers.

"Smuggled and transported somewhere in Minnesota, Linda adopted Blu and the two became inseparable since then. In the sheltered comfort and familiarity of Linda's home and bookstore, Blu thrives; in fact, he's more human than bird. "Blu has a checklist, a pile of books about the science of aeronautics, and a mountain of advanced math equations in which he's quadrated vector angles—adjusting for wind shear, of course," Eisenberg elaborates. "But it doesn't work, because no book can unlock the art of flying for a bird." Those secrets will be revealed only in Rio—and only through the rhythm of Blu's heart and the rediscovery of his roots.

"Despite his frustrations at being unable to fly, Blu and Linda are content. Says Leslie Mann: "They lead a simple life together in Minnesota. Linda is a homebody and Blu is her pal, and they're very happy." But their lives are turned upside-down with the arrival of Tulio (voiced by Rodrigo Santoro), an eccentric scientist who has traveled halfway around the world—from Rio to the U.S.—bringing news that Blu is the last male of his kind, and that Tulio wants Blu to come to Rio to meet the last female macaw, who's named Jewel (voiced by Anne Hathaway).

"Linda and Blu aren't so eager to uproot themselves from their happy home. After much deliberation, Linda and Blu make the fateful decision to travel to Rio, where Blu is to meet his female counterpart Jewel. But Blu and Jewel's first "date" is far from a love connection. The would-be lovebirds are complete opposites—Blu is domesticated and happy to spend time in a cage, and Jewel is fiercely independent and hates the idea of being stuck in a contained environment.

"Now, with his new friends by his side, Blu will have to find the courage to learn to fly, thwart the kidnappers who are hot on their trail, and return to Linda, the best friend a bird ever had.

"More than a point on a map, Rio is a magical place opening on April 7 (Thursday) in Philippine cinemas. from 20th Century Fox to be distributed by Warner Bros."