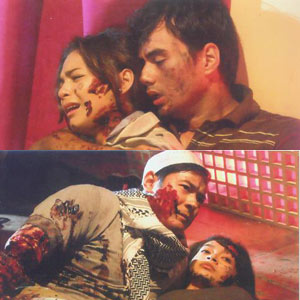 (Top frame) Lovi Poe and TJ Trinidad as well as (bottom frame) Allen Dizon and Ina Feleo portray journalists in the indie film, Deadline. TheJoel Lamangan film tackles the dangers faced by members of the media who courageously reveal the truth about the wrongdoings of government officials.

The rampant killing of journalists has earned notoriety for the Philippines as the most dangerous country in the world for media workers.

According to the National Union of Journalists of the Philippines (NUJP), 143 journalists have been killed since the ouster of dictator Ferdinand Marcos's regime in 1986. A total of 137 journalists were slain during the nine-year term of former President Gloria Macapagal-Arroyo.


Given the grave occupational hazards that journalists face today, it's admirable that they still choose to speak the truth. The same is true of director Joel Lamangan and writer Bonifacio Ilagan who tackle this controversial issue in their latest film.

Deadline: The Reign of Impunity follows five journalists in their struggle to expose the corrupt ways of a well-connected politician. Henry (Luis Alandy), a columnist for a major newspaper, is writing about a political dynasty in Mindanao that is receiving personal favors from the Palace. He receives reports from Azad (Allen Dizon) and Claire (Ina Feleo) who work for the Mindanao Weekly Herald.

When the powerful governor of Abdul Rabb (played by Tirso Cruz III) hears about the exposé, he sends his trigger-happy henchmen to silence the three journalists. The next morning, Henry is found dead; Azad and Claire are missing.


Newscaster Greta (Lovi Poe), Henry's fiancée, is determined to finish what Henry started. Together with Ross (TJ Trinidad), Henry's acquaintance and also a journalist, they plan to reveal the true colors of the governor. Will they be successful in their exposé or will they be silenced as well?

BACK STORY. Aside from the story of the five journalists, the back story provides us insight. In the film, the governor's family was able to hold on to the gubernatorial seat for decades with the help of Malacañang. In return, the governor helped the president to be re-instated into office through election fraud. He used public funds to support his private army and to live like a king.

The back story's parallelism with real life is not mere coincidence. Although Deadline is a work of fiction, the story is based on real events. This is where it gets tricky. The film combines real events, speculation, and fiction, so I suggest that you watch it with an open mind.

Director Joel Lamangan and writer Bonifacio Ilagan tread on dangerous ground. Although names are changed, it's easy to identify the real people behind the characters. I wouldn't be surprised if the filmmakers have received death threats because they've chosen to tell this story. Like the five journalists in the film, Direk Joel and Boni Ilagan are vanguards of truth who want to expose the past administration's secrets. I applaud their bravery and hope more films like this are made.

CRITICAL PRAISE. Despite my appreciation for the courage of the filmmakers, I wish the story were more cohesive. Like Direk Joel and Boni's previous film Sigwa, Deadline needs more focus. There are so many things going on. It would have been better if the story focused on either Azad and Claire or Ross and Greta. By cutting out some scenes, the script would be a lot tighter and the film would drag less.

What the film lacks in focus, it makes up for in good acting. Lovi Poe proves that the acting award she received for Mayohan was not a fluke. This girl can act. Her passion and intensity make her turn as Greta believable and convincing. TJ Trinidad, Ina Feleo, and Allen Dizon provide good support, although I wish that Ina and Allen were given more screen time.


Meanwhile, Tirso Cruz III's portrayal of the political warlord makes for a despicable villain. I have no complaint about his acting, but I feel that the character is one-dimensional. Still, he is able to come across as a trigger-happy politician.


It is also chilling to watch John Apacible get shot on the big screen in the chest. In real life, the actor died of real bullets when he was allegedly shot by his own uncle last March 20.

Deadline is slated to have a grand premiere night by June 2011.


(CLICK HERE to read more about this indie film)