PEP REVIEW: Tum: My Pledge of Love tells a love story in an avant-garde way 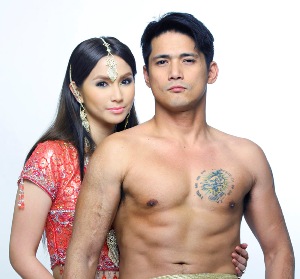 Written and directed by Robin Padilla, Tum: My Pledge of Love stars his wife Mariel Rodriguez (in photo) as well as Robin's daughter Queenie and young actor Ejay Falcon.

What do you say when your friends who just got married show you a wedding video that was conceptualized, written and directed by the couple themselves. No matter how cheesy, corny and tacky the outcome may be, you just can't help but feel happy for them. To you, the video is a masterpiece and at the end of the film, at the wedding reception, you just stand up and clap like you've just seen the Philippines' last Oscar hope.

In Tum: My Pledge of Love, Robin Padilla and Mariel Rodriguez make the entire Philippines their wedding reception.

Written and directed by Robin himself, Tum: My Pledge of Love is an extended wedding video that borrows ideas from cheesy love music videos and productions of film students too excited to use every camera technique and post production effects that their software can handle. It is also a long educational video about the Muslim faith, their views on Christianity, and their conflicts with Hinduism.

Tum: My Pledge of Love is about a Pinay named Linda (Mariel), who, because of the heartbreak and deception of an arranged marriage orchestrated by her parents, flees the country as a United Nations volunteer. Somehow she reaches India where she develops a very close father-and-daughter relationship with a wealthy Indian philanthropist. Upon his death he gives her his school where she teaches and cares for poor children.

The death of the wealthy philanthropist prompts his son, half-Pinoy, half-Indian Ravaan (Robin) to return to India from the Philippines. Ravaan is told that he can only get his father's mega millions of inheritance if he marries Linda, an arrangement she's unaware of. This is also the condition before Linda can take full control of the school, and she loves the school so much that she agrees to the marriage even if she loathes Ravaan with a passion.

To cut the story short, just like any other Robin Padilla movie, the cat and dog fighting blossoms into—what else?—romance, and then all the other things happen. Simultaneously.

There is too much going on in this movie actually. There's the fairy tale of Robin and Mariel, the Muslim-Christian love angle, there's the Hindu-Muslim love angle, there's Robin's daddy-issues, and random appearances of confusing symbolisms and imagry, like Robin on a horse. There's also a bunch of Indian people who want to kick Mariel out of their country but they're thwarted when Robin fights all of them. In the end it's not the fighting that convinces them to let Mariel stay but Robin's pep talk (huh?). And when Mariel finally has the Indians' blessings to stay in their country, they both leave for the Philippines (again, huh?).

And while most of the scenes are nice to look at, thanks to India's naturally beautiful landmarks, colors and scenery, and also some close-up slow-mo shots, wide crane angles, artistic coloring (as in Mariel's Philippine wedding scene), it looks like they did not want to waste any footage of the movie and crammed all their materials in the film. Some shots even appear for just a quarter of a second.

The editing in some parts of the movie is so avant-garde, in a bad way, with what looks like three scenarios being cut and pasted in random rapid successions. There was even a romantic scene that suddenly shifted to a fight scene, without changing the musical love score and resulting in a romantic punching session.

In this movie, Mariel Rodriguez is clearly smitten with her leading man. While she's supposed to show that she's upset and angered by Robin's arrogance and ill manners, she just appears to be in love. In fact, this goes on for the rest of the movie. Robin, meanwhile, carries on with his trademark action star walk, his romantico persona and his brand of English speaking that's effectively mimicked by co-star Ejay Falcon (unintentionally, I guess). Robin's daughter Queenie Padilla, meanwhile, is believable (and pretty too) as a Hindu girl defying tradition in the name of love.

But not all's that bad in this production. The costumes and production design are breathtaking and marvelous. Mariel is pretty in Indian garb, with makeup or none at all. The movie effectively shows India's colorful culture and tradition, literally and figuratively. It is also quite a smart and thrilling move for Robin to mix and match classic OPMs amidst beautiful Indian backdrop and Bollywood-inspired numbers.

In the end, Tum: My Pledge of Love just does not cut it as a cinematic masterpiece. Although it tackles serious issues like religious and cultural clashes, the story-telling is too loose and lacking in depth. The movie's several conflicts (there are so many of them), are easily resolved superficially.

At least Robin and Mariel had a blast filming this movie. It sure looks like they did.