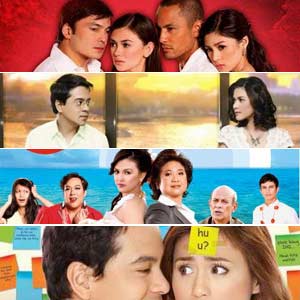 According to ABS-CBN, Star Cinema movies that earned more P100 million include (from top to bottom) I Love You Goodbye, Miss You Like Crazy, Here Comes the Bride, and My Amnesia Girl. The Metro Manila Film Fest entries shown last December 2010 will be reflected in the succeeding fiscal year.

"The consolidated net income of ABS-CBN Corporation ("ABS-CBN" or the "Company") (PSE: ABS, ABSP), the country's largest multimedia conglomerate, jumped by P1.5 billion or 87% to P3.2 billion in 2010.
ABS-CBN delivered consolidated revenues of P32.2 billion from advertising and consumer sales, posting an increase of P7.3 billion or 30% year-on-year.


"ABS-CBN's advertising revenues rose 50% or P7.3 in 2010 reaching P21.7 billion. This increase is attributable to the surge in total advertising minutes sold, programmed rate increase that took effect in February 2010 and political advertisement.


"Net income attributable to shareholders for 2010 is P3.2 billion, a P1.5 billion or 87% improvement over last year's net income.


"Capital expenditure and film and program rights acquisition in 2010 amounted to P3.7 billion, P738 million or 25% higher than the level of spending from previous year.


"The high-rating entertainment shows were ably complemented by erstwhile but constantly relevant and evolving news and current affairs shows- Bandila, Matanglawin, Rated K, TV Patrol, Umagang Kay Ganda, to name a few. These programs have become a staple not only in the delivery of news but also a source of knowledge.


"Sky Cable pursued its thrust to enhance viewing experience for its customers with continued move towards digitization. Together with the introduction of a tiered pricing mechanism, penetration rates in cable TV viewing steadily improved.


"ABS-CBN Film Productions, Inc. continued to produce and or co-produce compelling genres that are well received by the public. In 2010, a total of twelve movies were released with four of them—I Love You, Goodbye, Miss You Like Crazy, Here Comes the Bride, and My Amnesia Girl—exceeding P100 million in box office receipts and earning local blockbuster status."