The King's Speech will be screened in Manila starting May 11 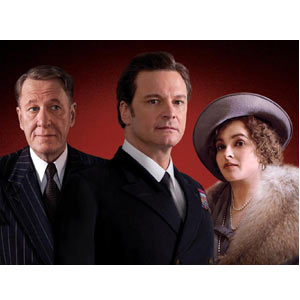 
"Rolling Stone Magazine hails it as "a crowning achievement powered by a dream cast," while Variety calls it "a stirring, handsomely mounted tale of unlikely friendship." Indeed, "it's a rare combination of crowd-pleaser and triumphant artistry," attests the Wall Street Journal.

"After worldwide acclaim since its American debut last November, The Weinstein Company's The King's Speech will finally make its Philippine run starting on May 11, exclusively at Ayala Malls Cinemas (Glorietta 4, Greenbelt 3 and Trinoma).

"Based on the true story of King George VI, The King's Speech follows the Royal Monarch's quest to find his voice. In the film, after the death of his father King George V (Michael Gambon) and the scandalous abdication of Prince Edward VII's (Guy Pearce), Prince Albert (Firth) who has suffered from a debilitating speech impediment all his life, is suddenly crowned King George VI of England.

"With his country on the brink of war and in desperate need of a leader, his wife Elizabeth (Bonham Carter), the future Queen Mother, arranges for her husband to see an eccentric speech therapist, Lionel Logue (Rush). After a rough start, the two delve into an unorthodox course of treatment and eventually form an unbreakable bond.

"With the support of Logue, his family, his government and Winston Churchill (Timothy Spall), the King will overcome his stammer and deliver a radio-address that inspires his people and unites them in battle."