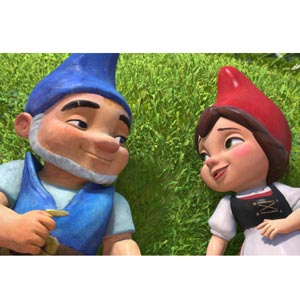 "The original Romeo and Juliet was penned by William Shakespeare in the late 1500s. The tragic tale of two teenage lovers endures today with countless interpretations—from Georg Benda's operatic adaptation in the 1700s to the popular 1950s stage musical West Side Story to 1996's MTV-inspired Romeo + Juliet.

"In 2010, Twitter premiered Such Tweet Sorrow—an improvised tweeted version of the play presented by the Royal Shakespeare Company and the Mudlark Production Company.

"And now we have garden gnomes, in Touchstone Pictures' animated comedy Gnomeo & Juliet.


"The filmmakers were instantly drawn to the irony of the film's premise. Says producer David Furnish, 'The concept of the film gave us the opportunity to take a classically well-known story and turn it on its head—reinvent it for a modern audience in a very funny way. The sheer fact that we have the high art of Shakespeare, the most revered playwright of all time, and the kitschy garden gnome gives us so many fantastic opportunities for comedy.'

"The challenge, says producer Steve Hamilton Shaw, was making the fun premise into an interesting big-screen movie. 'It's important that while this movie makes people laugh, it also presents a world the audience can believe in; they need to feel the characters' emotions. We needed to give it the heart and soul that would allow people to emotionally engage with the movie, so that the comedy plays that much better.'

"Enter Kelly Asbury, a director whose comedic experience and artistic roots made him a natural fit for the project. Asbury's directorial credits include the Oscar®-nominated Shrek 2 (2004) and Spirit-Stallion of the Cimarron (2002). He also worked as an artist on such notable films as "Shrek" (2001), Toy Story (1995), Tim Burton's Nightmare Before Christmas (1993) and Beauty and the Beast. The producers felt Asbury had a proven ability to showcase a comedic character's emotional side.

"But is it safe to transform one of Shakespeare's most beloved tragedies into an animated comedy suitable for the whole family?

"James McAvoy, who provides the voice of Gnomeo, considered the question. 'It's strange, isn't it, because it probably shouldn't work,' says McAvoy. 'But you know what? In most Shakespeare plays these days, the director goes out on a limb to set it in some new environment. We're probably not that far away from seeing a version in the West End or on Broadway where the actors are garden gnomes anyway. This is just getting there ahead of time. We're trailblazers here.'

"Aptly set in Shakespeare's birthplace, Stratford-Upon-Avon, Gnomeo & Juliet highlights the heated rivalry between neighbors Mr. Capulet and Miss Montague, who've taken their zeal for gardening to a whole new level. Their gardens overflow with kitsch plaster garden gnomes who, when the humans are out of sight, have taken up their respective owner's non-neighborly behavior. The feud has taken on an even more personal nature with the gnomes, where simply being a Red from the Red Garden or a Blue from the Blue Garden comes with a host of prejudices that most don't understand, yet fail to question.

"'Why gnomes?' asks producer Baker Bloodworth. 'Why not gnomes? This story is worth telling; it's relevant. I think the artwork is joyous and vibrant and colorful and it has Elton John tying it all together.'

"Fortunately for the garden gnomes, in addition to an extraordinary soundtrack featuring both new songs and classics from the Elton John-Bernie Taupin library, this version offers an all-new third act-replacing Shakespeare's tragic conclusion. 'I think this is definitely the ending that people always wanted from Romeo and Juliet,' says Emily Blunt, who lends her voice to Juliet (and actually kicked off her career on stage as a more traditional Juliet at the 2002 Chichester Festival).

"'The theme of the movie is that love can overcome hate; that's universal," adds Bloodworth. "It plays to everybody. We aim to entertain people and to send them out the door with something to think about."

But what would Shakespeare think?

"He was a great storyteller," says Bloodworth. "I expect he'd have good fun with this."

Opening across the Philippines on April 13 in Digital 3D and regular format, Gnomeo & Juliet is distributed by Walt Disney Studios Motion Pictures International."