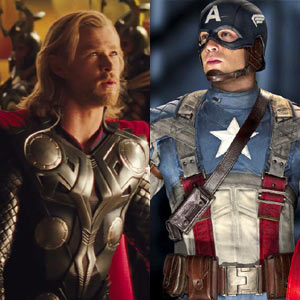 Thor (left) and Captain America: The First Avenger are some of the movies that viewers can look forward to this 2011.

Select guests were able to get a sneak peek into the upcoming movies that will be launched this year. Some are sequels of Paramount Pictures movies that were launched previously years ago.

Viewers can look forward to popular characters from Marvel Studios being brought to life on the big screen. This month will mark the release of Thor, starring Chris Hemsworth, Anthony Hopkins and Natalie Portman. This action-fantasy film tells the story of a mighty warrior sent down to Earth where he becomes the greatest defender of humans. Directed by Kenneth Branagh, Thor will premiere on April 29. (CLICK HERE to read more about this movie)

Another Marvel character that will come to life is Captain America for the movie, Captain America: The First Avenger. This tells the story of a man who was repeatedly turned down despite his desire to become a soldier. He becomes part of a top secret research project that turns him into an instant hero. Starring this film are Chris Evans, Hugo Weaving and Hayley Atwell. Directed by Joe Johnston, this film will be screened starting July 27.

The earth will be visited by unusual visitors as depicted in two movies coming out by June and August.

An accident witnessed by five kids turns out to be an intentional incident that leads to unusual disappearances and unexplainable events in a small town. This is what the movie Super 8 is all about. A film by J.J. Adams, starring Elle Fanning, Amanda Michalka and Kyle Chandler will hit the cinemas on June 8.

On August 10, manly cowboys will face unusual enemies that cannot be brought down by their guns. Cowboys and Aliens is a story of wild, wild, west cowboys who attempt to stop the planned take over of aliens in the world. This film stars former James Bond movie star, Daniel Craig; Indiana Jones and Star Wars lead star, Harrisson Ford and Olivia Wilde. It is directed by Jon Favreau, the director behind the movie Iron Man.

The classic 1984 dance movie Footloose (starring Kevin Bacon, Lori Singer and John Lithgow) will have a remake this 2011. Scheduled to open on October 26, the new version will now be topbilled by Kenny Wormald, Julianne Hough and Dennis Quaid, under the direction of Craig Brewer. This American musical film tells the story of a guy who lives in a city filled with youngsters who love rock music and dancing but experience being controlled by the older generation.

Ethan Hunt (played by Tom Cruise) will return to the big screen for Mission Impossible: Ghost Protocol. Also starring Jeremy Renner and Paula Patton, this movie will offer an adrenaline rush to viewers. Directed by Brad Bird, the film will hit the theaters by December 16.

For kids and kids-at-heart, here are three movies that everyone should watch out for in 3D:

The lovable Panda named Po is back to bring endless laugher as Kung Fu Panda 2 hits 3D cinemas on May 26. Po, together with the five warriors, has to stop an old enemy who aims to end Kung Fu's history. Voicing the characters are Jack Black, Angelina Jolie and Jackie Chan, with Jennifer Yuh as director.

"Autobots transform!" The Autobots and Decepticons will face off once again as the Autobots try to stop the Decepticons frmo getting the Cybertronian spacecraft that was hidden on the moon. Starring Shia LaBeouf, Rosie Huntington-Whiteley and Tyrese Gibson, this live action film is under the direction of Michael Bay. Watch the action in 3D theaters starting July 1.

The furry cat with a sword, a black hat and a cape is back for his own set of adventures. Puss in Boots will drive viewers crazy as the feline hero faces a lot of cat fights until he finally finds his way to Shrek and company. The film features the voices of Antonio Banderas, Billy Bob, and Amy Sedaris, under the direction of Chris Miller. It will be shown in 3D cinemas starting November 4.