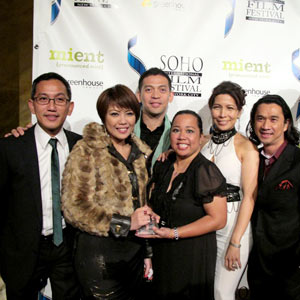 The film Ganap na Babae is the first recipient of the Mient's Pick for Excellence in Cinematography. The delegation of the film includes (from left) Greg Macaraeg, Sarah Roxas, Will Fredo, Rica Arevalo, Ida Tiongson, and Fernell Cruz.

"In Ganap na Babae, three stories are interwoven to see the plight of Filipino women through the sensitive eyes of three contemporary women directors—Rica Arevalo, Ellen Ramos, and Sarah Roxas.


"A prostitute, two sisters, and a widow come together to tell their stories about womanhood. A woman (Mercedes Cabral) shares her soul as a prostitute in front of the camera. A survivor, she looks back at her life as a mother.

"Milagros (Sue Prado) and Elena (Jam Pérez) are sisters tilling camote (sweet potato) in a dry land. Poverty provokes Elena to migrate as a mail-order bride in Japan while Milagros stays to take care of the family.

"Eos (Boots Anson Roa) is a widow who falls in love with a younger man, Rodrigo (Rome Mallari). They try to make the relationship work amidst the pressure of their family and society.

"Only seven awards were handed out and for the first time a technical award was up for grabs this year when Mient (pronounced Mint), a film distributor and major sponsor this year, partnered with SIFFNYC in the early planning of the festival and decided to recognize technical mastery via a Mient's Pick for Excellence in Cinematography. This was the last award of the night and HUBO Productions' Ganap na Babae (Garden of Eve) is the first recipient of this award.

"HUBO CEO/Resident Director Will Fredo accepted the award and in his speech recognized the valuable contributions of Myk Manalastas and Gym Lumbrera, the cinematographers of the film.

"Others in attendance were Directors Arevalo and Roxas, and HUBO Productions President Greg Macaraeg, Board of Director Ida Ceniza Tiongson, and Board Member Fernell Cruz. Fredo reiterated in his speech HUBO's support for women directors, the very essence why the project came to fruition. Fredo further added "This is a day to celebrate women and the hard work and commitment of everyone behind the production. We thank SIFFNYC and Mient for recognizing our work."

"HUBO Productions is an independent production company which aims to expose the complexity of the individual, thus its slogan "Raw Artistry Exposed". HUBO encourages artistry through practical means, and dedicates its art to stimulate the mind, however unconventional and unfamiliar."