Angel Locsin and Aga Muhlach have a forbidden romance in the movie, In the Name of Love 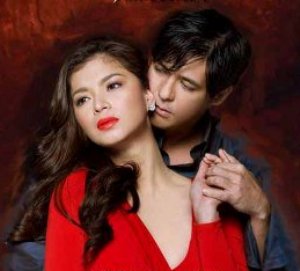 In the Name of Love, starring Angel Locsin and Aga Muhlach, is Star Cinema's 18th anniversary presentation. It will open in cinemas on May 11, 2011.

This May, Star Cinema will offer a romantic drama for its 18th anniversary presentation.

Titled In the Name of Love, this movie previously called Huling Sayaw is directed by Olivia M. Lamasan.

The movie will mark the very first big screen pairing of Aga Muhlach and Angel Locsin. Star Cinema says viewers will see Aga in a role we've never seen him before.

Coming from the recently concluded successful teleserye Imortal, Angel is expected to show even more versatility in this movie.

The movie will also mark the first time that Jake Cuenca and Angel will be directed by Olivia Lamasan.

It will also mark the return to the big screen of Carmi Martin.

The movie's theme song is the '70s hit, "Love Story (Where Do
I Begin)," interpreted by Gary Valenciano.

Written by Direk Olive and Enrico Santos, In the Name of Love is a very powerful romantic drama that captures the heart.

In the movie, Aga plays former dance instructor Emman Toledo who is now assigned to choreograph for the Governor's Ball. There he meets Cedes Fernandez (Angel Locsin) and Dylan Evelino (Jake Cuenca) whose engagement will take place.

The three people have no idea that this encounter will mark a radical change in their lives.

Someone will be left emotionally torn, one will feel cheated and make a sacrifice, one will have a change of heart. In the Name of Love will leave viewers intrigued with the question: "What would you give for one touch...one kiss...one great love..?"

Star Cinema says that the way its top cast will attack their characters, plus its the movie's scenes will make In the Name of Love "the most unforgettable romantic drama of 2011."