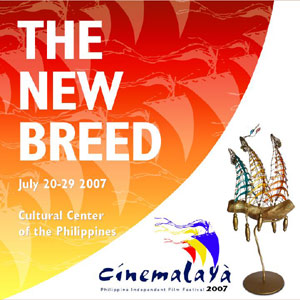 Every July, indie film lovers flock to the Cultural Center of the Philippines to herald the new breed of filmmakers that will infuse fresh ideas and innovations into the independent film scene. This ten-day film festival will not only feature original works commissioned by Cinemalaya, it will also screen notable Filipino movies produced in the last few years.

The Cinemalaya Philippine Independent Film Festival is a competitive film festival that aims to discover, encourage, and honor the cinematic works of Filipino filmmakers that boldly articulate and freely interpret the Filipino experience with fresh insight and artistic integrity. It also aims to invigorate the Philippine film industry by developing a new breed of Filipino filmmakers.

"This year's Cinemalaya has the most number of competing films in our three-year history," boasts CCP president Nestor Jardin during the June 27 press conference organized by the Cinemalaya organizing committee. "We will also have a staggering number of exhibition films—101, including 10 world premieres of new digital works as well as past Cinemalaya, Cinema One, and Cinemanila films. With a grand total of 120 indie films, Cinemalaya will prove to be the biggest film festival ever."

He also gave a historical background of the two previous film festivals organized by the CCP. "In 2005, the festival ran for only six days and featured only 30 films in four venues here at the CCP. We attracted an audience composed mostly of young people totaling 8,440.

"In 2006, we extended the festival to seven days, screened forty films in five venues and were watched by 15,234 people—representing an increase of eighty percent in audience attendance.

"This year, the festival will run for nine days and will feature 120 films with 209 screenings in six venues. With your help, we hope to surpass past Cinemalaya viewership this year," he urges.

The opening ceremony will take place on July 20, Friday, at the CCP Main Lobby. It will be marked by the Philippine premiere of Foster Child by Brillante Mendoza. The opening film was produced by Seiko Film's Robbie Tan. Foster Child, which was presented in the Cannes' Film Festival's Director's Fortnight, tells the story of a poor family that takes a three-year-old child under their wing.

Cinemalaya 2007 will feature 120 films, 10 of which will be world premieres, in a total of 209 screenings to be held in six venues from July 20 - 29, 2007 at the CCP. The third edition of Cinemalaya is expected to draw even more audiences, including international film programmers and foreign audiences.