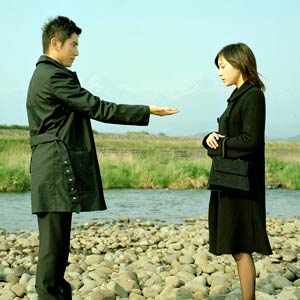 Eiga Sai, the annual Japanese film festival organized by the Japan Foundation and the Embassy of Japan, will treat film enthusiasts to the best of Japanese movies, which includes an Academy Award-winning masterpiece, from July 2 to 10 at the Shangri-La Plaza Cineplex Cinema 4. All of the films will be screened for free.

This year's festival kicks off with an invitational screening of Departures (Okuribito) on July 1, 7PM, at the Shangri-La Plaza Grand Atrium. It will be accompanied by a special performance by Renato Lucas, principal cellist of the Philippine Philharmonic Orchestra, together with the group's acclaimed pianist Naomi Saison.

Departures tackles the subject of death intelligently, and with outstanding acting performances to boot. Masahiro Motoki, who plays a cellist turned "encoffinner," also reaped acting awards from international festivals for his performance in this film.


As an "encoffinner," the lead actor has to clean up bodies of deceased people--a job that almost costs him his marriage. Departures won the Academy Award for Best Foreign Language Film at the 81st Oscars in 2009.

On July 2, Shang Cineplex will start offering Departures to the public, along with other exciting films such as The Chef of South Polar (Nanyoku ryorinin), a comedy about a chef in the South Pole, and The Summit: A Chronicle of Stones (Tsurugidake: Ten no ki), where a team is ordered to scale Mt. Tsurugidake, Japan's last unconquered mountain.

Animated film Summer Days with Coo (Kappa no Coo to natsu-yasumi) revolves around the friendship between a human and an amphibiuous creature called a Kappa. Your Friend (Kimi no Tomodachi) tells the touching story of two bullied girls who help each other overcome their personal hindrances.

A dedicated reporter is faced with ethical issues and faces life-changing decisions while he covers the biggest single-plane tragedy in the world in Climber's High (Kuraimazu hai). Yunagi City, Sakura Country (Yunagi no machi, sakura no kuni) examines the tragic effects of the Hiroshima bombing and the deep pain it carries through generations.

Maturity and dreams also play a big part in this year's film fest with One Million Yen Girl (Hyakumanen to Nigamushi Onna), which tells the story of a girl who vows to leave her bitter life, and Feel the Wind (Kaze ga tsuyoku fuiteiru), where ten runners aim to join an ultimate event for long distance runners.

All films will be shown with English subtitles and admission is free. After the screenings in Shang Cineplex, the festival will be held in the Gaisano Grand Citimall in Davao (July 22 to 24), Ayala Center Cinema 4 in Cebu (August 2 to 7), and the UP Film Institute (August 17 to 20).