Find out how Neil Patrick Harris met The Smurfs 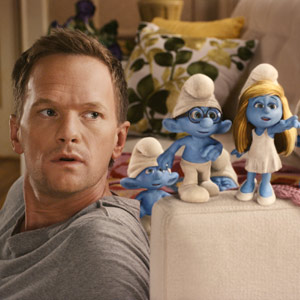 Neil Patrick Harris is a marketing executive whose life become entangled with The Smurfs. This animated family comedy will open in Philippine cinemas on August 10, 2011.

"When the Smurfs come through the magical portal from their village and into New York City, they enter the life of Patrick Winslow, played by Neil Patrick Harris (TV's How I Met Your Mother) in Columbia Pictures and Sony Pictures Animation's hybrid live-action and animated family comedy, The Smurfs.

"Patrick Winslow is a young marketing executive for the New York City based cosmetics company Anjelou and is months away from starting his own family. He's a nervous wreck about everything—not least of which is his impending fatherhood and his new job—and his nerves are going to take a beating when the Smurfs suddenly fall into his life!

"Patrick is married with a child on the way, he's an ad exec guy trying to make it in the business world, and he's constantly in fear of losing his job," says Harris of his character. "So he's sort of in the very business-headed frame of mind, and that has both him and his wife a little concerned that he's not going to be a decent parent, or even be present for the birth of their child, not only physically but emotionally.

"When the Smurfs come into his life, he has to behave in a very patient, even parental way with them, and when he does that, he realizes the potential to be a great dad that he has inside," says Harris. "His wife, Grace, is a more naturally maternal giver of wisdom to the Smurfs, while Patrick is an accidental participant who sees growth and change."

"Working with director Raja Gosnell was both a satisfying and enlightening experience for Harris. "Raj did a great job. He had to deal with so many weird little things happening all at the same time. Not only do you have all the ordinary stuff—making sure the actors hit their marks and it's all lit correctly—but you might have an animal in the scene, or maybe bowls on monofilament that in the final shot the Smurfs will be carrying around... Raj had to keep it all in his head so that when you see the movie, you never think about any of that. It's just that the Smurfs are part of our world."

"Not only is Neil incredibly funny and charming, but he also delivered nuance to the role," says Gosnell. "His character and Papa Smurf have a few quiet moments together, and he makes those scenes surprisingly emotional. And when you remember that Neil was talking to a little wire when he filmed it, it's an indication that Neil is also very game. A large part of acting is responding to your fellow actors, so it's incredibly difficult to work opposite characters that aren't there. But Neil jumped on it and embraced it."

"Equally successful on stage and screen, Neil Patrick Harris continues to demonstrate his creative versatility. He can currently be seen as the womanizing Barney Stinson on the hit CBS comedy series, How I Met Your Mother, a role which has garnered him four Emmy Award nominations, two Golden Globe nominations, and a People's Choice Award for Favorite TV Comedy Actor.

"Harris recently won his first two Emmy Awards for his guest-starring turn on the critically-acclaimed series, Glee. Named one of the 2008 Entertainers of the Year by Entertainment Weekly, Harris was included on Time Magazine's 2010 Time 100 List, an annual list of the world's leading thinkers, leaders, artists, and heroes.

"Opening across the Philippines on August 10, The Smurfs is distributed by Columbia Pictures, local office of Sony Pictures Releasing International."